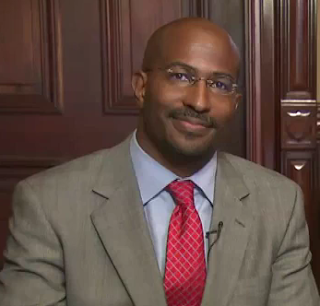 from latimes: Van Jones, the onetime Marxist whose controversial statements about Republicans and 9/11 have made him a distracting lightning rod as Barack Obama's environmental czar in recent days, resigned tonight. Now, the Sunday morning political talk shows (guest listings here) will have something really hot to talk about. On Wednesday, as The Ticket reported here, Jones was forced to apologize when a video surfaced of his February remarks in Berkeley, of all places, using a reference to a lower anatomical orifice to describe Republicans. The next day Jones again had to apologize for having his signature on a petition to then N.Y. Attorney General Eliot Spitzer seeking an investigation into the 9/11 attacks as possibly an inside job planned by then-Pres. George W. Bush to soften opposition to a war in Iraq.

raw story's stephen webster on van jones & 9/11: "i have no answers. all i have is doubt. my only conclusion is to question."