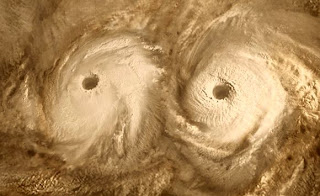 You may view astronomy boring, but south pole vortex of Venus may change your mind? The present writer prefers 2006 image (picture), when double vortex appeared. The picture revealed  Earth-like hurricane funnels.  A prior post on Venus south pole vortex, is available here.   In current article, "Venus's South Pole Vortex --Strange Behavior of a Whirlwind the Size of Europe," The Daily Galaxy reports:

"The astronomers in the UPV/EHU’s Planetary Science Group have completed a study of the atmospheric vortex of the south pole of Venus, a huge whirlwind the size of Europe similar to Jupiter's 300-year-old Great Red Spot and the South Pole Vortex on Saturn. In the atmosphere there are two main cloud layers separated by a distance of 20km. The astronomers have been closely monitoring the move- ment of the vortex on both levels, and have been able to confirm the erratic nature of this movement."

What did the research group find?

“We knew it was a long-term vortex; we also knew that it changes shape every day. But we thought that the centres of the vortex at different altitudes formed only a single tube, but that is not so...," concluded  Itziar Garate-Lopez, head researcher of the Planetary Science Group. The article summarizes mysterious atmospheric phenomena at Venus south pole below:

"The centers of rotation of the upper and lower vortex rarely coincide in
their position with respect to the vertical, yet they form a constantly
evolving permanent structure on the surface of Venus. Long-term
vortices are a frequent phenomenon in the atmospheres of fast rotating
planets, like Jupiter and Saturn, for example. Venus rotates slowly, yet
it has permanent vortices in its atmosphere at both poles. What is
more, the rotation speed of the atmosphere is much greater than that of
the planet."

"'We’ve known for a long time that the atmosphere of Venus rotates 60 times faster than the planet itself, but we didn’t know why,' says Garate-Lopez. 'The difference is huge; that is why it’s called super-rotation. And we‘ve no idea how it started or how it keeps going.'" Super-rotation remains fascinating phenomenon, although atmospheric gases may lie at heart of mystery?