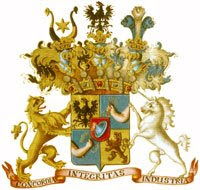 from anunnaki2006: You will hear the guest on CNBC speak of the Illuminati whilst talking on the volatile stock markets of the 24th of October 2008.

the rothschilds & their 200 years of political influence

from independent: Nat Rothschild, the financier at the centre of allegations that threaten to engulf the shadow Chancellor, George Osborne, is no stranger to laws which forbid politicians from accepting donations from abroad.

Political donations from overseas are also illegal in the US, where John McCain's campaign team is under investigation for allegedly accepting a benefit in kind from two mega-rich British citizens, namely Nat Rothschild and his father, Jacob, the Fourth Baron Rothschild.

In April, Mr McCain passed through London and spoke at a fund-raising dinner for expatriate Americans, where seats at the cheapest tables cost £500 a head. What caught the eye of Judicial Watch, a Washington-based foundation dedicated to combating corruption, was that the event was held "by kind permission of Lord Rothschild and Hon Nathaniel Rothschild" at the family home in Spencer House, St James's, the only privately owned 17th-century palace in central London.

The US Federal Election Committee is still investigating the allegation that Mr McCain's campaign team broke electoral law by accepting a benefit in kind from the Rothschilds. "We haven't heard from the FEC yet, and don't expect to until after the campaign," Tom Fitton of Judicial Watch said.