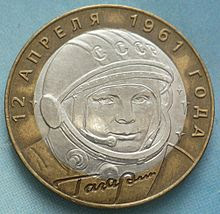 On the brink of a 50th anniversary, Yuri Gagarin is celebrated as first man in space. Gagarin, a handsome test pilot, remains the face of a Russian and Soviet first over cold war rival, the United States. The five foot two inch cosmonaut received Hero of the Soviet Union award, its highest honor. A sympathetic character, Gagarin came from humble origins, Klushinko, a country village. Just outside Moscow, a training facility was named after Gagarin following his death in a 1968 plane crash. Was Yuri Gagarin the first man in space aboard Vostok 1 on April 12, 1961? The sad truth is a far more fitting candidate, Valdimir Ilyushin, son of a Russian aircraft designer and a famous test pilot, was in reality five days earlier--the first. Ilyushin's flight went badly, however, and came down in China. The "real first man in space" spent the next year in a Chinese hospital before his return. A You Tube video, The Cosmonaut Cover-Up, provides Vladimir Ilyushin's story. The truth always makes a far more interesting story and this is one!