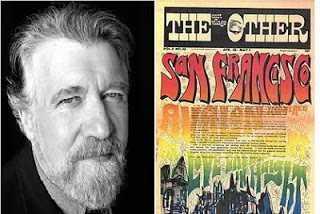 "Bowart practiced what the paper preached. At a 1966 hearing in Washington, D.C., on whether LSD should be made illegal, he testified that he had used LSD more than 30 times and urged one of the senators to go on an LSD trip and 'report back' on the experience. According to a New York Times article, none of the senators appeared eager to follow Bowart's advice. LSD was declared a controlled substance a few months later. Bowart subsequently helped launch a rumor that the mood-altering properties of LSD could be found in nonchemical substances, specifically bananas...It was widely believed that the 1967 hit 'Mellow Yellow' was songwriter Donovan's homage to bananas as a natural hallucinogen."

In hindsight, LSD may be considered "psychic munitions" with people never returning to normal fully, keeping in mind CIA interest in the drug as a weapon.  In 1978, Bowart wrote an astonishing book, "Operation Mind Control," years ahead of its time - a classic still relevant today.  Bowart spent his later decades of life speaking at mind control forums and founded The Freedom of Thought Foundation to educate public.  A quick insight into Bowart is provided by fascinating interview here.  Woo quotes Bowart's son Wolfe, who expresses his father's beliefs: "'He was really about .
. . freedom of the mind, the last frontier.'"