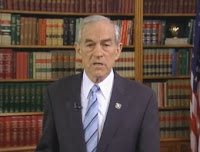 warnings of ‘social, political chaos’ & how to fire bernanke

from steve watson: Texas Congressman Ron Paul has delivered a riveting “State of The Republic” address on his Campaign for Liberty website, orating his thoughts on where the U.S. stands as a nation and what the future holds. Paul warns that if the country continues along the course it is on, we will witness a three stage slide into social and political chaos, beginning with the current financial crisis, a coming dollar crisis, and culminating in mass unrest.

mobilize now to oust bernanke as fed chair
from webster tarpley: In the aftermath of the Massachusetts Senate vote last Tuesday, we now have a concrete fighting chance to block the reappointment of Wall Street puppet Ben Bernanke as the chairman of the Federal Reserve Board of Governors by preventing his Senate confirmation next week. This afternoon, Bernanke’s support was eroding hour by hour. The defections from the Bernanke camp feature Democratic senators who are up for reelection this coming November.