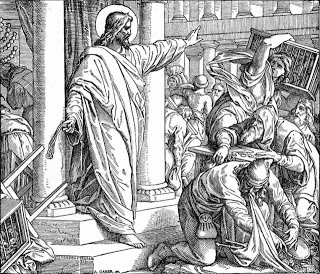 we must throw the moneychangers out of the temple

"and he entered the temple and began to drive out those who were buying and selling in the temple, and overturned the tables of the money changers and the seats of those who were selling doves."
- mark 11:15

paulson: congress has no authority here

from big picture: "As with any contract, the parties to the agreement may modify the covenants by mutual agreement only.” Hank Paulson's God Complex just got bigger. The Director of Government Bailouts, and head of the Socialism Department at Treasury has informed Congress to back off his turf. "All your legislation belongs to us!" Now, last I checked, it was Congress that had the power of authorization disbursements, and that Treasury does not have the authority to spend 5.3 trillion dollars (44kb PDF). Comrade Paulson does not seem to understand the way the different branches of government work in the United states, and is apparently unfamiliar with a little parchment called the Constitution. Perhaps we can get Ron Paul to explain how these things work to our friend from the People's Republic of Goldman.

ron paul blasts 'secret govt' running economy
from steve watson: Congressman Ron Paul has issued a stinging address concerning the financial crisis in which he outlines how the current economic problems, created via malinvestment and shift to a debt based economy, are now being mismanaged by private interests in secret. What's more he says he is not sure the Federal Reserve has any idea what to do next and that the Congress is totally oblivious to the whole sorry state of affairs - a cocktail of elements he warns puts the middle class of America in serious jeopardy. "Today we had a lot of financial fireworks in the markets, a lot of things are going on, and I think we are in the middle of something very big," the Congressman stated.

US gets busy printing money
from financial post: The U. S. Treasury cranked up its printing press yesterday to help the Federal Reserve extend an US$85-billion loan to American International Group Inc., the latest in hundreds and billions of dollars of government assistance that will undoubtedly end up in the lap of U. S. taxpayers. But while anxiety is rising over the United States' ability to foot the gargantuan bill for the credit crisis, analysts say the US$14-trillion U. S. economy should be able to absorb the shock. The key risk is the threat to inflation posed by the seemingly endless expansion of the government's balance sheet if several more financial institutions go belly up. "Clearly this will widen the deficit by quite a bit," Nariman Behravesh, chief economist of Global Insight, said at a presentation in Toronto yesterday. "But let's be honest, the U. S. is a very, very rich country."

fed announces $180b cash flood to fight crisis
from afp: The US Federal Reserve announced a 180 billion-dollar liquidity line to fight the racing fires of global financial crisis Thursday and said it was ready to do more. The move came in coordination with other leading central banks to pump cash into the financial system amid a credit squeeze that has dried up lending among commercial banks. The Federal Reserve of New York said in a statement it "shortly" would arrange a special overnight repo operation, a 24-hour credit to banks needing cash. The New York Fed said it "stands ready to arrange further operations later in the day, as needed."