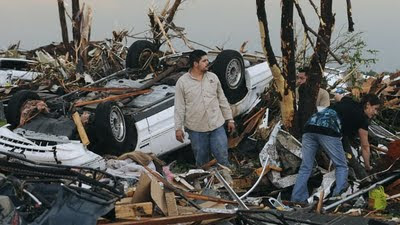 90 dead in joplin after deadliest US tornado in 60yrs

from abc: The death toll in Joplin, Mo., rose to 90 today as officials described the monster tornado that hit the city as a "once in a generation event." Meteorological records show that this was the deadliest tornado since 1953 when a twister hit Worcester, Mass., and caused 90 fatalities. Rescuers shifted through rubble today looking for survivors as high winds and hail continues to plague the area. The tornado blasted a six mile wide path through the city and left trapped survivors crying out for help this morning. "You see pictures of World War II, the devastation and all that with the bombing. That's really what it looked like," Kerry Sachetta, the principal of Joplin High School, which was mangled by the tornado. "I couldn't even make out the side of the building. It was total devastation in my view. I just couldn't believe what I saw."