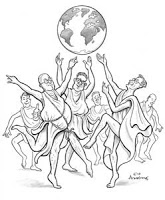 masters of the universe have a gay old time at grove

from sacramento news review: The dark woods on the outskirts of this run-down Russian River resort town are silent now, save the occasional rustle of wind through the towering redwoods. In two weeks, however, the thick moss-laden trunks of the Bohemian Grove will reverberate with the sounds of drag queens making merry, mock human sacrifices and the tinkling hiss of piss on trees.

Such events are unremarkable in themselves—one may witness similar scenes, minus the redwoods, in the alley behind SN&R any night of the week. But these are no mere ordinary mortals prancing about the forest, drinking themselves blind, urinating and defecating at will.

These are the Masters of the Universe.

power brokers due at bohemian grove

from press democrat: Legions of summer camp-goers spreading out around Sonoma County will be joined this weekend by some of the nation’s most powerful campers as the annual two-week encampment at the Bohemian Grove opens Friday night.

The super-secret Bohemian Club and its guests meet each summer in the 2,700-acre Monte Rio grove for what they say is fellowship and good-natured high-jinx — a break from the grueling grind of leadership.

But critics, who until recent years mounted protests outside its gates, say the gatherings serve as strategy sessions for a New World Order operating outside democratic institutions.

While the grove’s motto — “Weaving Spiders Come Not Here” — specifically targets arachnids, the club excludes all but the nation’s most powerful and well-connected individuals, according to critics.

will earthquakes topple idol at site of elite's pagan rituals? 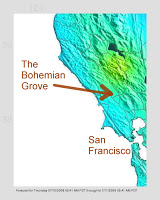 from renew america: The Bohemian Grove is a place where many of the wealthiest societal leaders — from business, government, and the news media — gather each mid-summer for drunken fellowship and pagan rituals. They worship before a 40-foot idol of an owl. (One such ceremony was caught on video by Alex Jones.) This writer's above-linked column goes into detail about idol worship and how it angers God. This paragraph is a brief overview to show readers that there is a connection between the idol worship at the Bohemian Grove, the endorsement of homosexual "marriage," the lightning-ignited wildfires, and the increased threat of earthquake in California... The Bohemian Grove is located between the major San Andreas Fault line and a "minor" line in that fault system.

from paul joseph watson: Outgoing President George W. Bush and both of his presumptive replacements John McCain and Barack Obama are rumored to be in attendance at this year’s Bohemian Grove gathering, an annual get-together of the global elite staged inside a sprawling forest encampment which kicks off tonight and runs until July 27.

Bohemian Grove is a 136-year-old all-male encampment complete with restaurants, bars, stages and lodges, which caters to around 2,000 members of the global elite along with Californian hoi polloi on a yearly basis in July. The camp is set within a 2,700 acre secluded forest replete with giant redwood trees.

Former attendees include Ronald Reagan and Richard Nixon, who both went on to become President, as well as regulars like Henry Kissinger, Alan Greenspan, David Rockefeller, Colin Powell, as well as George W. Bush and his father.