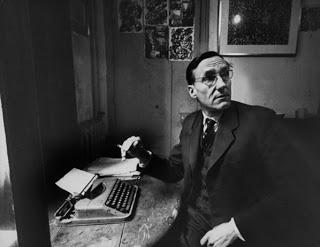 The Weird Cult: How Scientology Shaped the Writing of William S. Burroughs

from beatdom.com: This essay would be a lot easier to write without using the word “Scientology”. The Church of Scientology has given itself such a bad name over recent decades that it has become almost a swearword, or perhaps the name of a cheesy soap opera. You can’t take it seriously, it seems, unless you have something terribly wrong in your head. It’s hard for us today to separate the Church of Scientology from some of its ideas, or to look back and view it as it could have been viewed in the fifties and sixties, separated from lawsuits, spaceships and ‘Celebrity Centers’. Yet once upon a time it didn’t look quite so crazy. Before it became such a joke, Scientology must have appealed to many free spirits in the Beat and Hippie realm. Some of the ideas posited by the movement’s founder, L. Ron Hubbard, really didn’t seem so ludicrous then. Jim Morrison, the Beatles, Leonard Cohen, and Tennessee Williams are all alleged to have dabbled in Scientology back in its early days. It is unclear where and when exactly William S. Burroughs first came upon Scientology. Some sources claim that it happened in Tangier, at the 1001 Nights Restaurant, owned by Brion Gysin. The story goes that John and Mary Cooke – two oddly dressed, proto-hippy mystics who later came to be the main financial backers of the restaurant, and who were important figures in the founding of the Church of Scientology – came to snare Gysin for the fledgling religion, which Cooke reportedly described as “a billion buck scam”. They may have come on the advice on a Ouija board, or this may be mere conjecture. Gysin is said to have been skeptical of the movement from the get-go, but Burroughs – always infatuated by the weird and wonderful – dove head-first in. He supposedly described this meeting as “portentous”. He said the Cookes were “like holograms”.