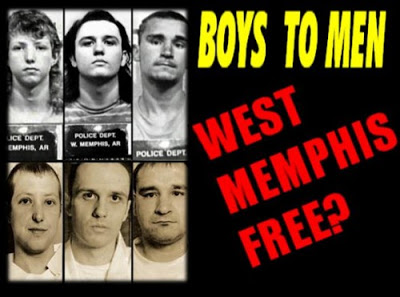 from beliefnet: After almost two decades behind bars, a trio accused of the grisly murder of three Cub Scouts have been released. A district court judge released Damien W. Echols, 36, Jason Baldwin, 34, and Jessie Misskelley Jr., 36, known as the West Memphis Three, in a legal maneuver known as an “Alford plea.” It does not result in a full exoneration since some of the convictions stand. However, the trio did not admit guilt. They were serving time for killing three 8-year-old boys in a notorious 1993 murder case that included accusations of Satanic rituals and involvement in Wicca. The slain boys were found nude in a drainage ditch, their hands tied to their feet. Two had drowned. The third bled to death from genital mutilation.

The deal came five months before a scheduled hearing was to held to determine whether the accused should be granted a new trial in light of DNA evidence that surfaced in the past few years — implicating an unnamed fourth suspect. None of the trio’s DNA has been found in tests of evidence at the scene. The Arkansas Supreme Court ordered the new hearing, giving new life to efforts to exonerate them.

The case has been the subject of three HBO documentary films claiming their innocence. The case was profiled by Joe Berlinger and Bruce Sinofsky’s 1996 documentary Paradise Lost: The Child Murders at Robin Hood Hills, and a 2000 sequel, Paradise Lost 2: Revelations, both of which cast significant doubt on their part in the murders.

Both films aired on the cable movie channel HBO. The filmmakers have produced a third installment, Paradise Lost 3: Purgatory, which is scheduled for release in January. The filmmakers were at the Jonesboro, Ark., hearing at which the three were released.

The HBO docs sparked a nationwide movement urging authorities to re-examine the convictions. Many celebrities also got on board, including movie actors Johnny Depp and Winona Ryder, the members of the rock band Metallica, Pearl Jam lead singer Eddie Vedder and singer Natalie Maines of the Dixie Chicks.

It was disclosed Friday that Academy Award-winning Lord of the Rings director Peter Jackson and his production partner Fran Walsh had quietly funded ongoing investigative efforts for the past seven years.

“With his release Friday, Echols became the highest-profile death row inmate to be released in recent memory.” reported Campbell Robertson in the New York Times.