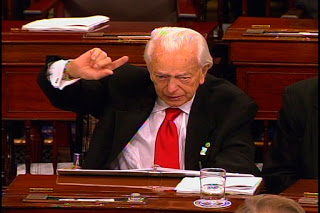 from usatoday: Sen. Robert Byrd, D-W.Va., made a rare appearance on the floor of the U.S. Senate on Wednesday to mark his 20,774th day as a member of Congress, making him the longest-serving member in history.

"Today, Madam President, is more than a commemoration of the length of service of one U.S. senator," said Byrd. "Today also celebrates the great people of the great and mighty state of West Virginia, who have honored me by repeatedly placing their faith in me."

Byrd, who turns 92 on Friday, is known for his command of arcane Senate rules and his ability to steer federal dollars to his home state. He also paid tribute to his late wife Erma, who died in 2006 at the age of 88. "My only regret is that my dear wife Erma is not here to enjoy this moment with me, but I know - yes, I do! - that she is smiling down from heaven and reminding me not to get a big head," he said.

Byrd made his remarks after the Senate passed a resolution honoring him.

Sen. Harry Reid, D-Nev., opened Wednesday's session by saying, "Every day since Jan. 3, 1953 - that's 56 years, 10 months and 16 days - West Virginians have been proud to be represented in Washington by Robert Byrd."

Byrd, who joined a filibuster to block civil-rights legislation in 1964, endorsed then-senator Barack Obama for the presidency during the 2008 campaign.

"Countless colleagues, myself included, have looked to him for advice, guidance and leadership over the years," President Obama said in a statement. "He is one of the most steadfast defenders of the United States Constitution, and he never lets us forget the guiding principles that make our nation great."