‘what would jesus buy?’ 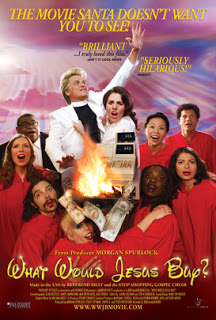 from raw story: With Americans expected to spend about almost $500 billion this Christmas, ABC’s ‘Nightline’ takes a closer look at one man trying spread the message that America is being crushed under the weight of consumerism.

“We’re proceeding into the shopping season under an enormous misunderstanding. We think we are consumers at Christmas time,” shouted the flamboyant Rev. Billy Talen of the Church of Stop Shopping. “No, we are being consumed!”

Talen is an activist and performance artist who’s made his presence known at malls and chain stores in New York City. His efforts to halt what he and his followers call the “shopocalypse” have been chronicled in a new documentary, ‘What Would Jesus Buy?‘ In the film, Talen is shown being kicked out of a Starbucks, performing an exorcism at Wal-Mart headquarters, and getting arrested in front of a Disney store.

“I think the commercial Christmas has become the Grinch,” says Talen. “Polls indicate that most Americans now think of Christmas with dread rather than happy anticipation, and that’s sad.”