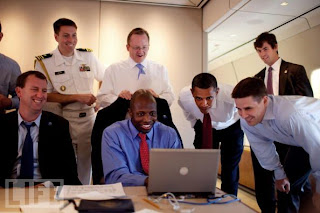 from cnet: The White House today proposed sweeping revisions to U.S. copyright law, including making "illegal streaming" of audio or video a federal felony and allowing FBI agents to wiretap suspected infringers. In a 20-page white paper (PDF), the Obama administration called on the U.S. Congress to fix "deficiencies that could hinder enforcement" of intellectual property laws... In October 2008, President Bush signed into law the so-called Pro IP ACT, which created Espinel's position and increased penalties for infringement, after expressing its opposition to an earlier version. Unless legislative proposals--like one nearly a decade ago implanting strict copy controls in digital devices--go too far, digital copyright tends not to be a particularly partisan topic. The Digital Millennium Copyright Act, near-universally disliked by programmers and engineers for its anti-circumvention section, was approved unanimously in the U.S. Senate. At the same time, Democratic politicians tend to be a bit more enthusiastic about the topic. Biden was a close Senate allypicked top copyright industry lawyers for Justice Department posts of copyright holders, and President Obama. Last year, Biden warned that "piracy is theft." No less than 78 percent of political contributions from Hollywood went to Democrats in 2008, which is broadly consistent with the trend for the last two decades, according to OpenSecrets.org.