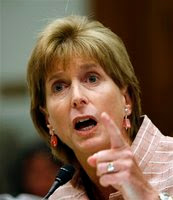 whitman on hot seat over 9/11 aftermath

from ap/my way: Ex-EPA chief Christie Whitman denounced as "downright falsehoods" the criticism of her assurances that it was safe to breathe the air around the fallen World Trade Center.

"There are people to blame. They are the terrorists that attacked the United States, not the men and women of all levels of government," Whitman said Monday at a hearing where she faced some of her toughest congressional critics.

Rep. Jerrold Nadler, a Democrat whose district includes the World Trade Center site, called the hearing after years of criticizing federal officials for what he says was a negligent and incomplete cleanup after the Sept. 11, 2001, attacks.

He opened the session by saying the Bush administration "has continued to make false, misleading and inaccurate statements, and refused to take remedial actions, even in the face of overwhelming evidence."

update: whitman testifies before house subcommittee
from talking points memo: In today's episode of TPMtv, we show you Whitman resting contentedly on the reassurances she pushed at the time, seemingly willfully ignorant of the number of workers and residents who have grown sick and dying in the ensuing years...