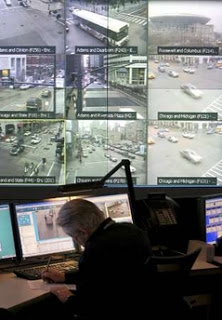 who watches the watchers in surveillance society?

from information week: In some cities in Europe and the United States, a person can be videotaped by surveillance cameras hundreds of times a day, and it's safe to say that most of the time no one is actually watching.

But the advent of "intelligent video" - software that raises the alarm if something on camera appears amiss - means Big Brother will soon be able to keep a more constant watch, a prospect that is sure to heighten privacy concerns.

Combining motion detection technology with the learning capabilities of video game software, these new systems can detect people loitering, walking in circles or leaving a package.

New microphone technology can isolate the sound of a gunshot and direct the attached camera to swivel and zoom in on the source. Sensitivity may reach the point where microphones could pick out the word "explosives" spoken in a crowd.

"There's just not enough personnel to watch every single camera," said Chicago emergency operations chief Andrew Velasquez. "We are piloting analytic software right now ... where you can set that particular camera to watch for erratic behavior, or someone leaving a suitcase on the sidewalk."

Since the attacks on the United States of Sept. 11, 2001, sections of New York, Washington, Los Angeles, Chicago and even a few smaller U.S. towns have been blanketed with closed-circuit cameras. Privately owned cameras are also proliferating.