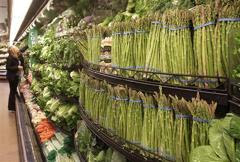 from ap: Wholesale prices jumped last month by the most in nearly two years due to higher energy costs and the steepest rise in food prices in 36 years. Excluding those volatile categories, inflation was tame.

The Labor Department said Wednesday that the Producer Price Index rose a seasonally adjusted 1.6 percent in February -- double the 0.8 percent rise in the previous month. Outside of food and energy costs, the core index ticked up 0.2 percent, less than January's 0.5 percent rise.

Food prices soared 3.9 percent last month, the biggest gain since November 1974. Most of that increase was due to a sharp rise in vegetable costs, which increased nearly 50 percent. That was the most in almost a year. Meat and dairy products also rose.

Separately, the Commerce Department said home construction plunged to a seasonally adjusted 479,000 homes last month, down 22.5 percent from the previous month. It was lowest level since April 2009, and the second-lowest on records dating back more than a half-century.

The building pace is far below the 1.2 million units a year that economists consider healthy.

There was little sign of inflationary pressures outside of food and energy. Core prices have increased 1.8 percent in the past 12 months.

Still consumers are paying more for the basic necessities.

Gas prices spiked in February and are even higher now. The national average price was $3.56 a gallon Tuesday, up 43 cents, or 13.7 percent, from a month earlier, according to the AAA's Daily Fuel Gauge. Rising demand for oil in fast-growing emerging economies such as China and India has pushed up prices in recent months. Turmoil in Libya, Egypt and other Middle Eastern countries has also sent prices higher.

But economists expect the earthquake in Japan to lower oil prices for the next month or two, which should temper increases in wholesale prices in coming months. Japan is a big oil consumer, and its economy will suffer in the aftermath of the quake. But as the country begins to rebuild later this year, the cost of oil and other raw materials, such as steel and cement, could rise.

Food costs, meanwhile, are rising. Bad weather in the past year has damaged crops in Australia, Russia, and South America. Demand for corn for ethanol use has also contributed to the increase.

Prices rose 1 percent for apparel, the most in 21 years. Costs also increased for cars, jewelry, and consumer plastics.