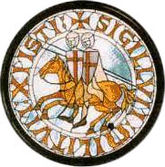 Why is Friday the 13th considered so unlucky? The present writer assumed it dated to the arrests of Jacques De Molay and the Knights Templar on Oct. 13, 1307. A closer look at folklore leaves doubt to its origins in article by David Emery, "Why Friday the 13th Is Unlucky". In an excerpt from "Tales of the Knights Templar," Katherine Kurtz recaps arrests of the Knights Templar: "On October 13, 1307, a day so infamous that Friday the 13th would become a synonym for ill fortune, officers of King Philip IV of France carried out mass arrests in a well-coordinated dawn raid that left several thousand Templars — knights, sergeants, priests, and serving brethren — in chains, charged with heresy, blasphemy, various obscenities, and homosexual practices.
None of these charges was ever proven, even in France — and the Order was found innocent elsewhere — but in the seven years following the arrests, hundreds of Templars suffered excruciating tortures intended to force "confessions," and more than a hundred died under torture or were executed by burning at the stake." The arrest led to seven years imprisonment for DeMolay, his remarkable recantation of guilt and curse placed on King Philip IV of France and his descendants and Pope Clement V. "Some time later, as he was about to be executed, he [DeMolay] appealed 'from this your heinous judgement to the living and true God, who is in Heaven', warning the pope that, within a year and a day, he and Philip IV would be obliged to answer for their crimes in God's presence." King Philip IV of France and Pope Clement V did, in fact, die within the year.

Emery points out in his article however, "There are problems with the 'day so infamous' thesis, not the least of which is that it attributes enormous cultural significance to a relatively obscure historical event. Even more problematic for this or any other theory positing premodern origins for Friday the 13th superstitions is the fact that no one has been able to document the existence of such beliefs prior to the late 19th century." Was the date appropriated later and built into myth? You can't help but look at the present illogical wars in the Middle East, which make more sense if viewed as religious conflicts? Are Masons at the top still doing battle anonymously with Islam? Or, is it myth built upon foundation of only superstition and urban legend?