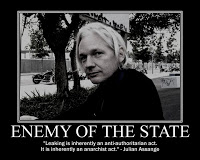 Wikileaks Is Not a Psy Op?

Anok Black, in a blog entry at www.Seismologik.com, offers the reader four reasons why Wikileaks is not a tool of the agenda. Black lists them: 1) it would be irrational and damaging for US government to use Wikileaks to build support for war, 2) it would be ineffective since patrons of Wikileaks already have anti-establishment views, 3) Julian Assange is anti-authoritarian not a CIA asset with supporting links to Assange's personal essays and an archive of Assange's blog, and 4) Wikileaks is not Julian Assange. Non-sequiturs flow from each of the four points. This is from someone who is, ostensibly, finishing a PHD in analytic philosophy!

Readers should ask why defend Wikileaks, because it's exposing injustice worldwide? It doesn't make sense for US government to use a platform such as Wikileaks? The conclusions do not follow from the arguments for each of the above reasons. Wikileaks history is suspicious at best. Where does the money for this project come from and how does Assange pay for his world travels? The only response to Black's blog entry may be the biggest knock against Wikileaks, Julian Assange aside, "...what seems missing from the leaks tells a stronger tale".