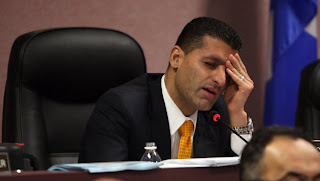 from windsorstar.com: Windsor on Monday joined the growing number of municipalities which have voted to end the decades-old practice of adding fluoride to the water supply in the fight against tooth decay.

“A lot has changed in the last 60 years … fluoride is not the be-all and end-all to prevent tooth decay,” said Mayor Eddie Francis, who voted with the majority. The motion passed 8-3 late Monday night. Council’s rejection of fluoride after more than five hours of debate went contrary to the almost unanimous opinion of health and dental experts, as well as others with scientific backgrounds, present among the 27 delegations which spoke at the meeting.

“Do not be the municipal council known for making a health decision against the advice of your health advisers,” said Dr. Mark Drkulec, president of the Essex County Dental Association.

The safety and the effectiveness of fluoride added to municipal water to help in the fight against tooth decay is “the general consensus of the scientific community,” said Dr. Allen Heimann, the local medical officer of health. “I’m using the best scientific information that is provided to me,” he added, citing studies and reports from such agencies as Health Canada, the U.S. Centers for Disease Control and the World Health Organization.

But opponents of continuing with a practice that began more than 50 years ago in Windsor were quick to draw on their own list of experts, studies and reports to support their contention that Windsor should join the growing number of Canadian communities, including Lakeshore, Tecumseh, Amherstburg, Calgary and Waterloo, that have voted to end fluoridation.

“I want to be shown that when we ingest this, we are safe,” said Kimberley DeYong of Fluoride Free Windsor. She and others said not a single study among those cited by fluoridation proponents looked specifically at the industry-sourced chemical used by the municipality and its impact on human health outside of tooth enamel hardening.

Peter Van Caulart, director of the Environmental Training Institute that trains municipal waterworks operators, said there’s been a 26 per cent drop in Canadian municipalities using fluoridation since 2005 and that in Niagara Falls, it was the first time council opposed its medical officer of health.