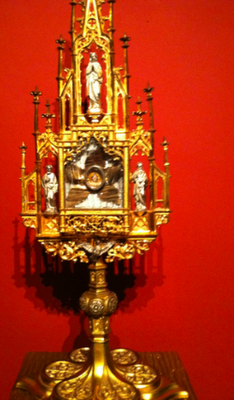 from catholic.org: Long Beach Police announced the arrest Thursday night. The stolen relic, a bone from St. Anthony‘s body, was housed in a 16th century reliquary, or case, which is used for the display of such relics. Typically reliquaries are made of gold or silver and are virtually priceless for their exquisite workmanship, not to mention the relics they contain… The police were contacted and they promptly began their search. A suspect was described as a woman in her late thirties who had been seen at all of Sunday’s masses, and who took what was described as an unusual interest in the relic. The break in the case came from a surveillance video obtained from a nearby business. Police did not say what information from the video they used to identify the suspect, 41 year-old Maria Solis who was arrested and questioned on Thursday. Police have not suggested a motive in the case. The parishioners of the church prayed for the return of the relic, and were very grateful to see it return undamaged. Perhaps surprisingly, St. Anthony is the patron saint of lost things.