from wikinews: Yesterday, thousands of people attended anti-war protests in London and Glasgow organised by the Stop the War Coalition. The event marks nearly five years since the 2003 invasion of Iraq which begun the Iraq War. The main themes were "Troops out of Iraq and Afghanistan", "Don’t attack Iran", and "End the siege of Gaza"... Estimates as to the number of protesters in London range from 10,000 according to the Police, up to 40,000 according to the organisers.

from press tv: Protests have been held in the Belgian capital against the US-led war in Iraq as the fifth anniversary of the invasion approaches. About 1,100 people gathered in Brussels on Sunday to protest the US-led war and subsequent invasion. The demonstrators held banners saying, "No war in Iraq" and "No war for oil" and called for the withdrawal of US and British troops from Iraq, as well as a greater role for the United Nations, AFP reported. 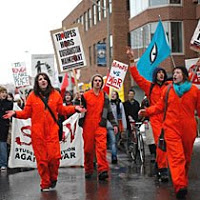 from windsor star: Thousands of protesters filled streets across the country on Saturday to speak out against Canada's military mission in Afghanistan and to mark the upcoming five-year anniversary of the start of the war in Iraq... "The majority of Canadians want the troops to come home now - shame on Parliament," said Diane Alexopoulos at a rally on the front lawn of the Ontario legislature in Toronto. 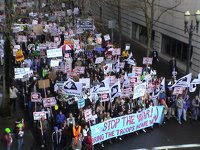 from portland indymedia: Thousands of people gathered together in the South Park Blocks near Portland State University in Portland Oregon today, March 15, 2008, to commemorate the 5th year of the Iraq invasion and Occupation, which began on March 19, 2003. Despite the drizzle, the rain, the downpours and even the hail at one point, the event was well attended.