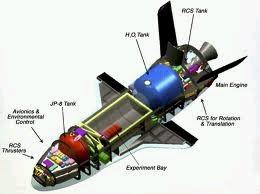 You can follow robo-shuttle, or if you're Russia and China, a space plane and secret weapon from humble beginnings under NASA X-33 project to present adoption by United States Air Force (USAF). The X-37B is shrouded in secrecy, its objectives never publicly declared. The present writer believes, if you cannot declare publicly there's a reason. Are X-37B objectives a matter of national security, i.e., war? Space Travel article by Morris Jones, an Australian writer, asks the questions not found in the mainstream American press.  The Australian wonders what is behind closed payload doors--as picture labels it--in the experimental bay?  Morris believes two testing programs are conducted: 1) space plane and 2) the cargo.  The second experimental program "... is the cargo carried inside... In principle, there's no strictly technical reason for both of these programs to be carried out in parallel on the same mission. But the 'twin tests' have probably come about for practical reasons. The history of the program yields some light on this."

The article continues with pairing of X-37B with a renewal of spy satellite research by the NRO and a dovetailing of interests. "For the NRO, the X-37B program provides a timely opportunity to do recoverable testing of such items[new operational spy satellites]." "X-37B: This Is Only A Test," is a must read and agree, "... some mysteries can be solved by deduction," others will simply remain due to government and military blackout.