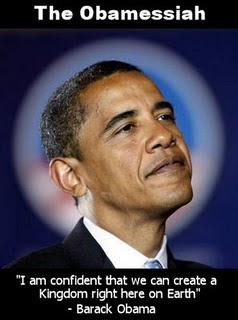 yes we can! (but please don’t): obamessiah launches 2012 psyop

from washington post: President Obama’s decision to launch his 2012 reelection campaign Monday is about much more than money. It is an acknowledgment by the president’s team that the grass-roots army that helped propel Obama to the White House needs repair and rejuvenation.

That corps of volunteers defined the character and personality of Obama’s first run for the White House. It was in many ways an organic movement, which sprang to life in 2007 and gathered momentum through the course of the campaign. Since then it has atrophied.

Obama advisers know his reelection will depend on many things, some of which are out of their control. What they also know is that a victory will rely in part on their ability to reenergize those volunteers, to stitch together the unusual coalition of African Americans, Latinos, young people, women and college-educated white voters who backed Obama in 2008. That is within their control.

Monday’s headlines focused on Obama’s “billion-dollar campaign” and the lengths to which campaign manager Jim Messina, among others, has begun the process of stroking big donors and setting big targets for fundraising.

The desire to start raising money early should not be underestimated. Obama was extraordinarily successful raising money in small donations in 2008. His haul from the Internet — hundreds of millions of dollars — underscored the bottom-up nature of his candidacy.