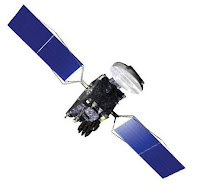 Intelsat's Galaxy 15 communications satellite, after drifting in orbit since last April, has been revived! The zombiesat gained notoriety for its intrusions on neighbors, after its electronic brains were supposedly fried by a solar flare, which caused several crises and interference avoidance maneuvers. The solution was to drain power from the comsat and induce a system reboot, which occurred on Dec. 23, 2010. The satellite is currently in safe mode and no longer poses a threat to the neighborhood. Intelsat has a FAQ section, which includes information on an in-orbit protection plan! Intelsat remains hopeful software can be reloaded from the ground and the satellite's functions fully restored! Or, will the zombiesat need to eat other satellite brains in order to survive?