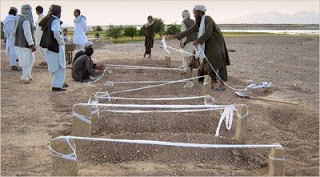 100 civilians die in botched US airstrike on afghanistan

from wikinews: Afghan officials warned that a United States raid had killed 100 people, "mostly civilians", in the Afghani province of Farah. Among the dead was a member of the International Committee of the Red Cross (ICRC) and his family. "Twenty-five to 30 of them are Taliban, including from Chechnya and Pakistan, and the rest are civilians including children, women and elderly people," said police official Abdul Rauf Ahmadi. The governor of the province, Rohul Amin, said that he thought that as many as 100 civilians were killed in the raid. A spokeswoman for the ICRC said the organization sent help to the region after being contacted by village elders. "When [our team] went to the first two villages where these incidents took place they saw dozens of bodies. They saw graves and they saw people being buried." ICRC officials also claim that they saw women and children among the dead. The U.S government has said it is conducting a joint inquiry into the incident. State department spokesman Robert Wood, said in a statement: "Coalition forces and the Afghan government have received reports of civilian casualties in conjunction with a militant attack on Afghan National Security Forces in Farah Province on May 5." Deputy provincial governor Mohammad Younus Rasouli said that villagers brought the bodies of 20 dead children to his office in the capital city of Farah as proof that the raid killed civilians. Approximately 2,000 civilians were killed in fighting against the Taliban in 2008, the United Nations says.

update1: taliban may have faked civilian slaughter
from danger room: Did the Taliban stage a slaughter of dozens, to make U.S. forces in Afghanistan look like butchers? That’s what American military officials are implying in response to claims that coalition airstrikes killed dozens of civilians taking shelter from fighting between Taliban militants and international troops in Afghanistan’s Farah Province. The International Committee of the Red Cross reported dozens of dead, but Gen. David McKiernan, the top U.S. commander in Afghanistan, suggested that the deaths may not have been caused by airstrikes. McKiernan told reporters in Kabul: “We have some other information that leads us to distinctly different conclusions about the cause of these civilian casualties.” An anonymous defense official took things a bit further, telling the Washington Post’s Greg Jaffe: “the Taliban went to a concerted effort to make it look like the U.S. airstrikes caused this.” According to the New York Times, forensic investigators are investigating the possibility that Afghan civilians were killed by grenades thrown by Taliban fighters, who then paraded the bodies around a village, claiming the dead were killed by American bombs. And Col. Greg Julian, the main U.S. military spokesman in Kabul, downplayed the total number of casualties, telling The Wall Street Journal he was “pretty sure the high numbers of casualties are not going to prove true.”