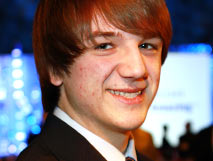 from mercola.com: Pancreatic cancer is a devastatingly fatal form of cancer, and is typically regarded as the most deadly and universally rapid-killing form of cancer. According to the U.S. National Cancer Institute,1 an estimated 45,220 Americans will be diagnosed with pancreatic cancer this year, of which 38,460 are expected to die. Part of the problem is that this cancer is usually diagnosed quite late, contributing to the abysmal five-year survival rate. It also shows you just how ineffective conventional detection methods and treatments are.

All of that may soon change however — all due to the persistence and dedication of a high school kid who decided there must be a better way to detect this lethal cancer sooner...Yes, a 15-year-old boy named Jack Andraka has done what scientists with millions of dollars-worth of research grants at their disposal have failed to do. He invented a dipstick-type sensor to detect pancreatic, ovarian, and lung cancer that is: 168 times faster, 26,000 times less expensive, and 400 times more sensitive than the current standard of detection.

And he did it using Google and Wikipedia as his primary research tools — online resources that are available to virtually anyone on the planet with an internet connection. What’s more, the test costs three cents, takes five minutes, and has a 90 percent accuracy rate. Compare that to the current standard, which employs 60-year-old technology, costs about $800, and misses 30 percent of all pancreatic cancers.