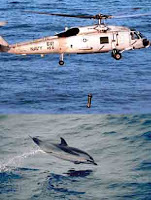 152 dolphins off iranian coast ‘suicided’ by US sonar

from abc: The mysterious "mass suicide" of 152 dolphins washed up on Iran's coast over the past month has alarmed environmentalists, with the blame pointed at regional fishing practices.

from gulf news: The mass death of more than 150 Striped Dolphins in southern Iran over the last month could be due to the herd of mammals following a sick dominant male, said a UAE-based marine expert.

from what really happened: Or, more likely, the US Navy is playing with their Super Sonar again, as the described behaviors of the dolphins matches what we saw here in Hawaii during tests of the system.