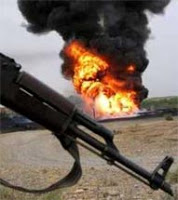 190,000 US guns given to iraqis remain unaccounted for

from raw story: A new GAO report shows that about 190,000 guns, given to Iraqi security forces in 2004 and 2005 during training, have gone missing, the Washington Post reports.

The forces were being trained by present-day commander Gen. David H. Petraeus when the weapons were distributed; according to the GAO, proper procedure was not followed, and the weapons have not been properly tracked. The Pentagon isn't disputing the report.

Officials concede that it is likely that these weapons, bought with American taxpayer money, are being used against US forces.