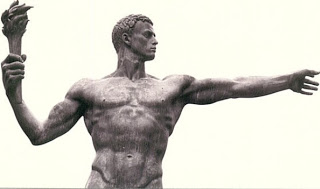 "2013 is going to be the convergence of many events that have been more or less in a holding pattern. First of all, there exists a hidden and very powerful, Satanic elite that is largely controlling world events. This elite which goes all the way back to Nimrod and the Tower of Babel has changed names many times. Sir Francis Bacon, a Rosicrucian (the forerunner of the Illuminati,) planned for America to be the “New Atlantis” and head of the New World Order, long before 1776."

The coincidental birth of America and the Illuminati in same year of 1776, is underscored, by McGuire. The roots of the United States belong as much to Illuminati and Freemasonry as Christianity the point made below:

"The Illuminati was officially formed in 1776 by Adam Weishaupt, the same year America was born. Many of our Founding Fathers who claimed to be Christians were actually member of the Illuminati. The architectural symbolism all over Washington D.C. is Illuminati and Freemasonry symbolism...The Washington Monument is a phallic symbol and the capital is the symbol of a womb. This is repeated in Egypt and many other cultures."

The Lucferian Age wlll see global government use a wide selection of weapons taken from a hyper-scientific and occult armamentarium all intended to subject masses to their control.  The population's subjugation will come, regardless, whether people remain aware of their manipulated state.  The reality will likely see most people, experiencing a confused, befuddled state left to wonder why they can no longer think or act effectively?   McGuire states clearly both drugs and naturally-occurring environmental conditions will be employed for purposes of control:

"In the Book of Revelation it talks about 'sorcery,'  which comes from the word pharmakeia, from which we get the word pharmacy. It talks about a global government which maintains control through drugs, the occult and scientific mind control. This global government will eventually be controlled by the Antichrist and the False Prophet, who will head a one world religion and a one world economic system and who will place the mark of the beast on their subjects."

McGuire reserves a reference for former Lt. Col. Michael Aquino and his 1980 white paper co-authored with Colonel Paul E Valley, "From PSYOP to MindWar: The Psychology of Victory," which seems a pivotal turning point in military's attempt to influence mind in order to secure victory. McGuire stresses all means of control from positively charged ionized air to electromagnetic fields, will be employed against you!

"Ordo Ab Chao" or "Order Out of Chaos" remains a mainstay of Illuminati and weapon of choice to maintain grip on power. McGuire explains how disaster works in their favor:

"They understand that their god Lucifer is in a war with one third of the angels
in a revolution against the Biblical God. They know they are revolutionaries!
That is why the Illuminati use the term, “Order out of Chaos!”
Chaos is part of revolution. That is why Marxist revolutionaries, who
received their game plan from the Illuminati, use the word crisis or manufactured
crisis. A manufactured crisis is built on chaos. That is why the two Columbia
University professors, Cloward-Piven created an anarchistic strategy which would literally overwhelm all government and social systems. The results
would be chaos, which would create a demand for a new order! This is the
Illuminati strategy of using manufactured crisis."

"This is why the disciples of this kind of radical socialism use the term, 'Never let a good crisis go to waste!' This is why America, economically, socially, politically and militarily is the midst of an accelerated series of crises, such as the manufactured fiscal cliff and the ever increasing national debt. Ever- increasing national debt is the Cloward-Piven strategy of manufactured crisis. It is intentionally designed to break the system, so that a new one can be created! The goal has never been to fix the economic crisis! The goal is to accelerate the economic crisis, in order to bring in the New World Financial Order that is the game plan of the Satanic elite. A new world currency is to be adopted by 2018, with a new currency called the Phoenix. With this comes the predicted mark of the beast and the bio-chip implant. More than likely hundreds of millions of people have already received the mark of the beast through a vaccination, which injects a nano-chip technology that settles in the brain, probably behind the forehead, where it is predicted to be in Revelation 13."

It will be interesting to see if new world currency will be called the Phoenix or someone discovers a nano-chip behind their forehead? Reality is indeed stranger than fiction!

McGuire asks rhetorically if two descriptions are only same thing from different perspectives: "But are we approaching the New Golden Age or the last days? Is this the new world order, or is it the Apostasy and Great Tribulation?" The present writer believes they're the same events.

The author believes the power to overcome is within us, but must be used consciously:

"...You have direct access to a power far greater than yourself to make changes that will protect millions and drive back the Luciferian forces of darkness. You can access that power anytime you choose, but you must actively choose to do so. That power is a divine power and it is accessed by faith. Jesus Christ called it the “kings of the kingdom.” If you trust in Christ, you have the keys of the kingdom and now you must use them wisely for your life depends on it and the lives of all those you love. First, you must understand that you are in a spiritual war with the Lucifer and his forces. But you have been given the power to overcome him."

The present writer only hopes McGuire is right!