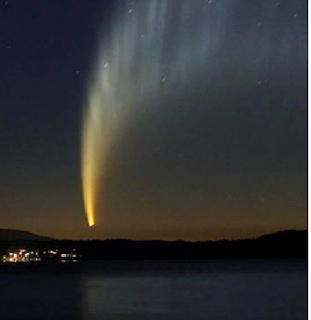 Stargazers looking ahead, may experience, year of the great comets in 2013.  Two Russian Astronomers Vitali Nevski and Artyom Novichono discovered Comet Ison on September 21, 2011. Writer David Whitehouse previews more recently what sky watchers can expect in "'Brighter than a full moon': The biggest star of 2013... could be Ison - the comet of the century":

"By the end of summer it [Comet Ison] will become visible in small telescopes and binoculars. By October it will pass close to Mars and things will begin to stir. The surface will shift as the ice responds to the thermal shock, cracks will appear in the crust, tiny puffs of gas will rise from it as it is warmed. The comet's tail is forming...By late November it will be visible to the unaided eye just after dark in the same direction as the setting Sun. Its tail could stretch like a searchlight into the sky above the horizon. Then it will swing rapidly around the Sun, passing within two million miles of it, far closer than any planet ever does, to emerge visible in the evening sky heading northward towards the pole star. It could be an "unaided eye" object for months...."

Comet Ison may be visible to the unaided eye for months - an impressive prospect!  Perhaps, more remarkable, two comets may be plainly visible in night skies of 2013 as Whitehouse explains:

"Remarkably Ison might not be the only spectacular comet visible next year. Another comet, called 2014 L4 (PanSTARRS), was discovered last year and in March and April it could also be a magnificent object in the evening sky. 2013 could be the year of the great comets"

The present writer grew up on tales of the 1910 Halley's Comet, but it's return in 1986 proved a disappointment.  Halley's Comet wasn't  large or bright on its last pass only a speck in the night sky.  Hale-Bopp, the Great Comet of 1997 proved highly satisfying, remaining visible for over a year!  Comet Ison will hopefully live up to its advanced billing and exceed Hale-Bopp!  Heavenly bodies are earthbound!