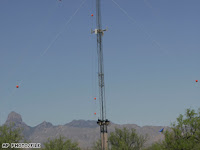 from ap: The government is scrapping a $20 million prototype of its highly touted "virtual fence" on the Arizona-Mexico border because the system is failing to adequately alert border patrol agents to illegal crossings, officials said.

The move comes just two months after Homeland Security Secretary Michael Chertoff announced his approval of the fence built by the Boeing Co. The fence consists of nine electronic surveillance towers along a 28-mile section of border southwest of Tucson.

Boeing is to replace the so-called Project 28 prototype with a series of towers equipped with communications systems, cameras and radar capability, officials said.