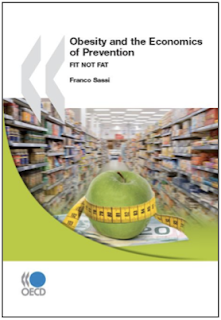 from natural news: America is already on the verge of drowning in sick-care bankruptcy, but the situation is about to get even worse. According to a new study released by the Organization for Economic Cooperation and Development, three-fourths of Americans will be obese or overweight by 2020. That puts America in first place for the world competition to see which nation can create the most obese population.

Seriously, according to the research, America is No. 1 on the world obesity rankings, meaning a higher percentage of the U.S. population is obese (or overweight) than in any other country in the world.

Not surprisingly, why this is happening brings up all sorts of different explanations ranging from entirely valid to completely bizarre. But the simple truth of the situation is that Americans are fat because of these three simple reasons:

Reason #1) We don't get much exercise.
Reason #2) We eat too much food.
Reason #3) The food we eat is mostly processed dead food of marginal nutritional value.

These three reasons largely explain why America has become the fattest nation in the world.