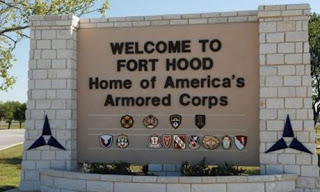 from danger room: Oh, God. “At least seven people are dead and 12 wounded in a shooting at Fort Hood in Texas,” MSNBC is reporting. Local TV reports are referring to a single shooter. @BreakingNews, on the other hand, mentions multiple gunmen, “dressed as soldiers.” One is arrested, and a second is “on the loose.”

UPDATE: Now, the tee vee is saying 20 wounded, and three suspects — all in fatigues, with military-style weapons.

UPDATE 2: The Austin-American Statesman has set up a Twitter feed with all the latest developments. Turns out this was the second shooting at the base in less than a year.

or, the latimes says: "12 killed, 31 injured in pair of shootings at texas army base"

violence all too familiar at fort hood

so, with all due respect, what's the story going to be:
ptsd & the 3 lone gunmen? white al-qaeda & the radicalized homegrown errorism? or a guy fawkes day attack by obama-hating 'patriots'? whichever way this goes, as i've said many times before: when the fake conservatives are in, the enemy is abroad; when the phony left comes in, the enemy is here... reagan vs russians, bush1 vs iraqis, clinton vs mcveigh & militias, bush2 vs iraqis, etc...

video update: ft hood shooters were soldiers; key details emerge
from huffpo: Officials say a shooting suspect at Fort Hood has been identified as Maj. Malik Nadal Hasan, who they say was an Army mental health professional. A law enforcement official said Hasan, believed to be in his late 30s, was killed after opening fire at the base. The official spoke on condition of anonymity because he was not authorized to discuss the case publicly. A defense official speaking on condition of anonymity says Hasan was a mental health professional – an Army psychologist or psychiatrist. It was not known whether he was treating people at the base. Officials says it was not clear what Hasan's religion was, but investigators are trying to determine if Hasan was his birth name or if he may have changed his name and converted to the Islamic faith at some point. 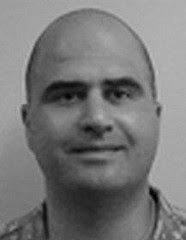 US army psychiatrist allegedly carried out massacre at fort hood*