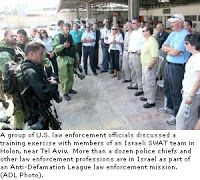 video: 7 years on, osama bin laden still at large
from raw replay: Seven years after the attacks on the World Trade Centre, Afghanistan is again the frontline of the US-led “war on terror” with extremist unrest intensifying and Osama bin Laden is still on the run. This video is from AFP, broadcast September 10, 2008.

on 7th anniversary of attacks, white house claims bin laden was not the ‘mastermind’ of 9/11
from thinkprogress: In a press conference today, a reporter asked White House Press Secretary Dana Perino about the administration’s ongoing efforts to find Osama bin Laden, calling him the “mastermind” of 9/11. Perino interrupted the reporter, claiming bin Laden was not the true “mastermind” of the attacks:

PERINO: No, Khalid Sheikh Mohammed was the mastermind of 9/11, and he’s sitting in jail right now.

al-qaeda to release 9/11 anniversary video
from bloomberg: Al-Qaeda is planning to release a video message within 24 hours to mark the seventh anniversary of the Sept. 11 attacks on the World Trade Center and Pentagon, a U.S.-based intelligence group said. The terrorist network's media production unit as-Sahab published banners on the Internet earlier this week flagging the release, with a graphic saying "Wait 11 September," IntelCenter, based in Alexandria, Virginia, said in an e-mailed statement today... "This is the greatest amount of build-up al-Qaeda has generated for any anniversary video release designed to mark 9/11," IntelCenter said in a statement. There have been no confirmed sightings of bin Laden since he escaped U.S.-led forces in the Tora Bora region of Afghanistan in December 2001.

many abroad doubt al-qaeda link to 9/11
from dpa: According to an international poll released Wednesday, there is still broad scepticism that it was al-Qaeda. Majorities in only nine of 17 countries said they believed that al-Qaeda was behind the attacks, the Maryland-based WorldPublicOpinion.org reported. A total of 22 per cent believed there was a conspiracy by the US government or Israel. On average, 46 per cent of the 16,000 people who were questioned believed al-Qaeda was really behind the attacks. Steven Kull, director of the polling agency, said it was "remarkable" that seven years later, there was no international consensus "given the extraordinary impact the 9/11 attacks have had on world affairs."

reflections on 9/11
from cindy sheehan: Whichever of the theories is true, one thing is for sure: the Bush regime's response to 9/11 was woefully inept and criminal and many people have been killed, wounded, displaced or destroyed because of the Bush regimes' exploitation of the tragedy to use ultra-violence against the innocent people of two nations in response to a criminal act perpetrated by a few. Watching the recent RNC was a reminder of 9/11 hysteria used to justify implementing the Project for a New American Century and excusing BushCo for the crimes they have committed on the non-existent graves of our brothers and sisters who perished that day and whose remains were never recovered.

a 9/11 'what if?'
from consortium news: What if we had never gone to war? What if, after the shocking crimes of September 11, 2001, the United States had pursued a different course? What if all the blood which has been spilled in the name of justice still flowed in living veins; all the American, Iraqi and other lives shattered were still whole; all the homes destroyed or lost still standing, still occupied by families who never harmed us? We have spent monumental treasure and energy on two wars. What if, instead, we had invested a fraction of that in a determined, unrelenting effort to bring Osama bin Laden to justice in a fair and transparent trial in a court of law? Of course, we’ll never know.

why doesn't the public care about 9/11 war crimes trials?
from mcclatchy: Seven years ago today, the horrific hijackings united this nation in grief and determination. Now, despite four years of on-again, off-again Guantanamo war crimes tribunals designed to get Sept. 11 justice, there is little evidence that the trials resonate with victims' families and the American public. "The Guantanamo trials are much more secretive," said O'Hare, 56. "If Khalid Sheik Mohammed was the mastermind of the attack, and these attacks took place in the United States, that's where the trials should occur." Some blame the tribunals' location — a military outpost in southeast Cuba — and focus so far on foot soldiers. Attendance at the no-broadcast trials is by Pentagon invitation only. Others say accounts and allegations of detainee abuse tarnish the tribunals. Moreover, ever since the world watched O.J. Simpson try on that black glove — live on television in 1995 — Americans have wanted high-profile trials be a shared, national experience. And that may be how Guantanamo disappoints.

from london independent: France's favourite stand-up comedian has been forced to apologise for claiming that the 9/11 terrorist attacks on the US seven years ago tomorrow were an "enormous lie" orchestrated by the American government. The allegations by Jean-Marie Bigard have caused consternation in France because the comedian - who specialises in foul-mouthed, scatological and sexist humour - is a close friend of President Nicolas Sarkozy. On a radio show last Friday, the comedian interrupted a discussion on American politics, to say that it was "absolutely sure and certain" that the US government had stage-managed the 9/1l attacks in which 2, 896 people died. "The two planes which crashed in a forest and on the Pentagon never existed. There never were any planes. It's an absolutely enormous lie," M. Bigard said. "It was an American missile which hit the Pentagon. That's now been proved. It was a programmed demolition."

flashback: september 11, 2007: ’wall of silence’ surrounds 9/11, says german tv reporter; united airlines denied permission to film flight 93 wreckage'
from history commons: Zweites Deutsches Ferhnsehn (ZDF), Germany’s public television station, broadcasts an investigation into alternative accounts of 9/11 called “Mythos und Warheit: Der 11. September 2001.” The documentary concludes there was no government conspiracy behind the attacks but describes what producer Michael Renz calls a “wall of silence” when he approached officials for information. “When officials are asked about 9/11 conspiracy theories they react by barricading themselves. For example: one of the greatest mysteries about the attacks on America is the apparently empty crater in Shanksville, Pennsylvania. Where is the wreckage of Flight United 93?

* A 9/11 Commissioner
* A Congress member
* A military leader
* An intelligence professional
* A scientist
* A structural engineer or architect
* A legal scholar
* A victim’s family members or heroic first responder
* A psychiatrist or psychologist
* Or one of the thousands of other highly-credible people who question 9/11...

But you just want to cover nonsensical stories of McCain and Obama threatening to “get” Osama Bin Laden and fight the “war on terror” more effectively, don’t you? Oh well, that’s why your company is losing viewers and readers … people want real news! 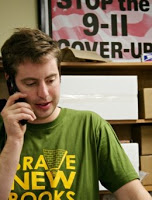 from daily texan: Sept. 11 conspiracy theories are widespread — some seemingly outrageous, others eerie and perhaps persuasive. The U.S. government knew it would happen. The U.S. government planned for it to happen. The trade centers were rigged with demolition explosives. American Airlines flight 77 never actually hit the Pentagon. The planes that struck the Twin Towers and the Pentagon were remote-controlled. The U.S. issued visas to the hijackers, despite warnings that they were terrorists. Rallied around the 9/11 Truth Movement, celebrities, ex-CIA members, scientists and victims’ families continue to ask questions and seek justice. “It’s incredible the totality of evidence we have on our side,” said Harlan Dietrich, co-owner of Brave New Books, a store on the Drag dedicated to suppressed information and open discussion. “We don’t have all the answers, but we’re trying to ask the questions.” 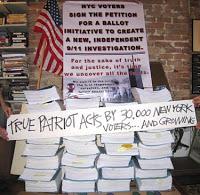 from 9/11 blogger: Some said it couldn't be done. However, others here in NYC knew different. They knew that with the right attitude, the right effort, all that mattered was doing whatever work was required to establish the foundation for the NYC 9/11 Ballot Initiative. This public referendum is the most substantial, well-structured effort to date that can result in a subpoena-powered, fact-driven, comprehensive investigation of the most momentous event of our time. Now, 30,000 petition signatures, the minimum requirement to submit a ballot initiative to NY City Council has been reached. From here we will work to double and triple our numbers. We will widen our base and build even greater momentum.

american airlines flight 77: the key to the 9/11 enigma?
from global research: Six years have elapsed since the attacks took place at the World Trade Center and the Pentagon and many of the pieces to the 9/11 puzzle still remain scattered and disconnected. A broad overview of the September 11 attacks on the World Trade Center and the Pentagon points to American Airlines’ Boeing 757, Flight 77 as the weak link in the 9/11 incident. The official account of the Pentagon explosion contains inconsistencies and aberrations that can and should be explored and exploited.

study says 70k may suffer 9/11 ptsd
from ap: New data from a public health registry that tracks the health effects of 9/11 suggest that as many as 70,000 people may have developed post-traumatic stress disorder as a result of the terrorist attacks. The estimate, released Wednesday by New York City's Department of Health (1.5mb pdf), is based on an analysis of the health of 71,437 people who enrolled in the World Trade Center Health Registry. They agreed to be tracked for up to 20 years after the Sept. 11, 2001, attacks, and the study was based on answers they volunteered about their health two and three years after the attack.

9/11 truth has failed to create change

from rogue government: It is now seven years after the attacks of 9/11 and there is little question that the official story of these events is a complete fraud. Unfortunately, the corporate controlled media has successfully demonized and discredited people who have done legitimate research on these events and question the official story. The media has also used the outrageous and over the top antics of certain people in the 9/11 truth movement to add fuel to this fire. They have done a fantastic job of painting a false reality for the general public to think that anyone who questions the official story must be crazy. At one point in time these antics might have been warranted to get people’s attention, but now with 9/11 truth out in the open these tactics are proving less and less effective. Although it is important for people to understand the true nature of the 9/11 attacks, taking to the streets and yelling about it has played right into the hands of the corporate controlled media and has relegated research on this issue to the fringe... The very definition of insanity is doing the same thing over and over again and achieving the same result. At first, I really believed that the issue of 9/11 was something that could be used to really change things but unfortunately I was wrong. While we still have a large segment of people obsessing over 9/11 truth, the elites are working on their next move. It is time to move beyond focusing in on just the issue of 9/11 and use 9/11 as just one piece of the puzzle that can be used to unlock the minds of others. This article is not meant to demonize the activism and efforts of others as most 9/11 truth activism has had positive results. Instead, this is an attempt to provide an honest opinion on what 9/11 truth has accomplished to date. Stop following leaders and groups and become your own leader. If we had more leaders than followers of leaders we’d be much more effective at changing things and that is especially true with 9/11 truth. That’s what really needs to happen if things are going to change.