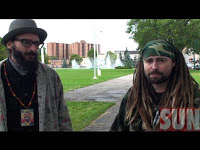 from winnipeg sun: They're going across the country in hopes of tracking down what they say is the real story behind the 9/11 attacks. About 10 members of the so-called Vancouver 9/11 Truth Society rolled into Winnipeg yesterday on a small bus while en route from the West Coast to Ottawa to try to push Canadian authorities to launch a new, independent probe of the World Trade Center catastrophe.

"There's a need for another look at the whole attack," Michael Welch, a Winnipeg resident assisting the Vancouver group, said while pointing to a U.S. commission that investigated the fall of the Twin Towers.

"There are so many holes in the official story. And the official commission is so riddled with fraud, cover-up and conflict of interest that there is no way that responsible people should accept it."

He and his West Coast colleagues "suspect that 9/11 was facilitated, if not orchestrated, by elements within the U.S. government military - to put it succinctly, an inside job."

And that was because of a desire among U.S. powers "to go into places like Afghanistan and Iraq to control energy and to place strategic military bases proximate for allies," he said.

The group hopes to get a chance to make its case here to Liberal Leader Stephane Dion while he's holding a retreat for his party's caucus in the city.

Member Darren Pearson stressed there is no reason Canada can't investigate 9/11 on its own.

"There are things that happen all over the world that our government looks into for us," said Pearson. "Twenty-four Canadians died in the towers. That alone should be enough."

from whyn-am 560: Almost seven years after a terrorist attack felled the World Trade Center's twin towers in New York, work began Tuesday on a memorial to those who died.

Steel for the National Sept. 11 Memorial and Museum began arriving in Lower Manhattan last Thursday, The New York Times reported. It was shipped by truck from an Owen Steel Co. plant in South Carolina.

"To have it on site and to begin construction is a lift -- a necessary lift," said Joseph C. Daniels, the memorial's president and chief executive.

The Port Authority of New York and New Jersey hopes to complete construction by the 10th anniversary of the 2001 attacks.

The memorial is to be a plaza around two spaces filled with waterfalls and pools marking the towers' footprints.

The museum is to be mostly underground.

The project has been the subject of many disputes over the design, how the names of the victims would be displayed and the contents of the museum.

from ny daily news: After Kenny Johannemann shot himself, relatives found a letter on White House stationery in the one-room apartment he shared only with his cat.

Dear Kenny, We send you our heartfelt thanks and the thanks of a grateful Nation for your selfless efforts in responding to the tragic events of Sept. 11. Your actions in the midst of this national tragedy were truly heroic. Your saving a man who was on fire by dragging him out of an elevator and getting him to an ambulance reflected the best of the American spirit.

Johannemann was a part-time janitor assigned to clean rest rooms in the north tower on 9/11 and was, indeed, credited with saving a man. His family says that day changed him, that he became withdrawn and began drinking heavily, falling in and out of work.

Twelve days before the seventh anniversary of the day he saved a life, Johannemann took his own. The police then vouchered another letter, the suicide note the 43-year-old wrote on Sunday afternoon, shortly before the 5 p.m. deadline his landlord had set for him to vacate for nonpayment of rent.

"The reason I killed myself was 'cause I was getting evicted and I can't handle being homeless. I also am very depressed since I was in 9/11. I've been drinking way too much and it's ruined my life. I've lost friends and family over drinking and I'm very lonely. There is nothing left for me to be happy about other than my cat. Sounds weird, but it's true. I just wanted to say sorry 2 any people I ever hurt in my life. I really was a good person when I wasn't drinking. I hope people remember that! Goodbye!!! Kenny Johannemann"

On a separate sheet was a plea: "Please find my cat a home. His name is Papa-Boy and he's a very special cat."

update: key 9/11 eye witness 'commits suicide'
from brasscheck tv: The Daily News reported yesterday that Kenny Johannemann - a key witness in the WTC 9/11 bombings - recently committed suicide. I call him a key witness because in spite of aggressive prodding from reporters about "the planes," he clearly called what happened on the upper floors of the World Trade Center "explosions."