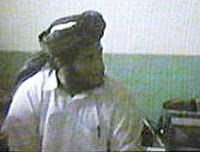 (3.98mb PDF) obtained via the Freedom Of Information Act show that alleged 9/11 hijacker Hamza Al-Ghamdi had booked future flights to San Francisco and Riyadh, suggesting that he was unaware of his eventual fate aboard United Airlines Flight 175, the plane that hit the World Trade Center's south tower. 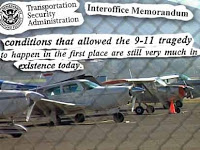 from abc: Thousands of foreign student pilots have been able to enroll and obtain pilot licenses from U.S. flight schools, despite tough laws passed in the wake of the 9/ll attacks, according to internal government documents obtained by ABC News. "Some of the very same conditions that allowed the 9-11 tragedy to happen in the first place are still very much in existence today," wrote

(519kb PDF) one regional security official to his boss at the TSA, the Transportation Security Administration.

'lone gunmen' producer questions gov't on 9/11
from corbett report: Cast and crew of the X-Files attended "WonderCon 2008" in San Diego this weekend to discuss the upcoming X-Files movie. During the question and answer, one intrepid audience member asked Chris Carter, creator of X-Files and The Lone Gunmen, about the pilot episode of The Lone Gunmen, which eerily predicted the events of 9/11 that took place in New York mere months after the episode aired on tv. Carter, looking slightly flustered, turned the question over to the Lone Gunmen producer, Frank Spotnitz.

flight 93 memorial a tribute to terrorists?

from news blaze: The rewriting of 9/11 started almost before the fires stopped smoldering in New York, D.C., and Pennsylvania. It hasn't stopped. And nowhere is it more offensive than in the effort to build memorials to the victims of that horrific terrorist attack. The New York City memorial almost became not a tribute to heroes, but a "Freedom Center," tasked with showing how the United States brought 9/11 on itself, and how peace, love, and the hug-a-terrorist philosophy could avoid other such attacks in the future.

video: bill clinton confronted with 9/11 truth, again!
from blacklisted news: Bill Clinton Responded to an "Investigate 9/11" sign during an Austin Rally. As mobs of people in the crowd shouted for the sign to be put down - and still others tore the 9/11 sign away - Clinton told the crowd, "It's an honor to be heckled by people who are afraid of the truth." True doublespeak.

from ny daily news: Chanting "$25 million isn't enough!" dozens of sick 9/11 first responders stood in the rain on Capitol Hill Tuesday and urged President Bush to restore funding to help pay their medical bills. Joseph Zadroga, whose son James died of lung disease after working 100 hours at the site for the NYPD, said the government needs to help those who helped the city get back on its feet after the towers fell.

from unique pakistan: In a significant observation many time UN contributor & international observer Professor Hans Koechler said “9/11 may have been an insider’s job” in response to a question from one of the delegates attending his lecture The 'Global War on Terror - Contradictions of an Imperial Strategy' last night at the Trades Hall in Auckland. “I am not a boy - I am 59. There are many inconsistencies and inaccuracies in the official version of events. Those who could not handle a Cessna pulled off 9/11,” he said.