from people's voice: The Financial Times (FT), once the liberal, enlightened voice of the financial elite (in contrast to the aggressively neo-conservative Wall Street Journal) has yielded to the totalitarian-militarist temptation. The feature article of the weekend supplement of August 16/17, 2008 – “The Face of 9/11” – embraces the forced confession of a 9/11 suspect elicited through 5 years of hideous torture in the confines of secret prisons. To make their case, the FT published a half-page blow-up photo first circulated by former CIA director George Tenet, which presents a bound, disheveled, dazed, hairy ape-like prisoner. The text of the writer, one Demetri Sevastopulo, admits as much: The FT owns up to being a propaganda vehicle for a CIA program to discredit the suspect while he stands trial based on confessions obtained through torture.

From beginning to end, the article categorically states that the principle defendant, Khalet Sheikh Mohammed, is the “self-confessed mastermind of the September 11 attacks on the US.” The first half of the article is full of trivia, designed to provide a human-interest feel to the courtroom and the proceedings – a bizarre mixture discussing Khaled’s nose to the size of the courtroom.

a new 9/11 clue
from jerry mazza: Recently, an email drifted in about an article I wrote, What were the Mossad with fraudulent New Zealand Passports doing in Iraq? The writer said, “I’ve known about this for some time - that the Mossad was involved in murdering our troops in a variety of methods to keep them there so we could ‘finish’ the job by destroying Syria and Iran. For years now I’ve suspected and now know for sure the Mossad had a lot to do with the 9/11 attack on the WTC. The attached mp3 is a recording of NYPD radio transmissions on 9/11. Listen from the 3-minute mark almost to the end. This was never reported in the media.”

The recording is titled, “The WTC-10-5-the-message-about-the-remote-controlled-plane.” In the mélange of scratchy voices bumping each other off and on, around minute three, the words “remote controlled-plane” bump through clearly, are interrupted, and finally assert quite clearly again that “there’s a big truck on King Street with the mural of an airplane painted on it diving into New York City and exploding.” It was later noted “King Street between 6th and 7th Avenues,” about a mile north of WTC, which was in direct line of sight from King St. and 6th Avenue...

steel cross installed near flight 93 site in pennsylvania
from raw replay: Steel beams that were once part of the World Trade Center are now shaped like a cross and standing in Shanksville, Pennsylvania, near the spot where one of the hijacked planes from 9/11 crashed. This video is from The Associated Press, broadcast August 25, 2008. 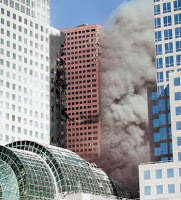 from paul joseph watson: NIST Claims “New Phenomenon” Occurred For First Time Ever In Collapse Of WTC 7, Yet fails to address why ground zero workers and media outlets had prior knowledge of an “extraordinary event” never before observed an hour in advance, plus myriad of other ignored issues...

In its final report on the collapse of WTC 7 that news outlets are reporting “puts 9/11 conspiracy theories to bed,” NIST claims that the never before observed “new phenomenon” of “thermal expansion” was to blame for the destruction of the building, a completely ludicrous conclusion in a report that simply ignores eyewitness testimony and hard evidence that points to the deliberate demolition of the structure.

NIST completely fails to address prior knowledge of the building’s collapse, including why news outlets like the BBC and CNN reported that the building had collapsed an hour before it actually fell, as well as firefighters on the scene who are heard on video saying, “Keep your eye on that building, it’ll be coming down soon.”