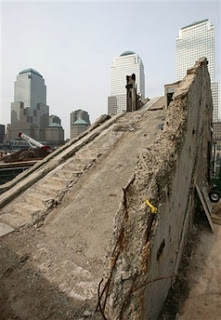 from reuters/yahoo: Debris that may have contained bits of bone from victims of the World Trade Center attacks was used to fill potholes and pave city roads, according to court papers filed on Friday.

The charge was made in an affidavit filed in Manhattan federal court in an ongoing case filed in 2005 by family members of those killed in the attacks against the city. They say the city did not do enough to search for remains, denying victims a proper burial.

Eric Beck, a construction worker employed at the Fresh Kills landfill in the borough of Staten Island, where the rubble was taken after the Twin Towers fell, said in his affidavit that the process of sifting through the debris was rushed.

Beck said he saw sanitation workers removing small pieces of debris containing possible bone fragments and loading them "onto tractors, and using it to pave roads and fill in potholes, dips and ruts."

Kimberly Miu, a spokeswoman for the city's legal office, declined to comment on the latest filing, saying it would be inappropriate to talk about a pending motion.

The WTC Families for Proper Burial, the group that filed the suit, has also battled the city over how to honor the 2,749 people who died in the attacks on the Twin Towers.

Some relatives of victims have opposed any effort to rebuild on Ground Zero, calling it sacred ground and saying it would disrespect those who perished there.

Construction of the planned memorial and skyscraper has repeatedly been delayed, in part due to concerns expressed by victims' families.

The remains of about 40 percent of the victims were never recovered, and hundreds of bone fragments have been discovered in and around Ground Zero in the last six months, the lawsuit says.