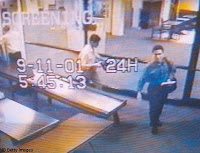 from washington times: Attorneys for the families of five persons killed in the September 11, 2001, attacks said yesterday that their negligence lawsuit yielded new information about what they think were security lapses that allowed terrorists to board and hijack planes.

The families filed the suit in 2003 against the airline industry and airport security companies. A settlement was announced yesterday at the National Press Club.

The suit involved the relatives of four persons who died in the Pentagon and one killed at the World Trade Center in New York. The families were not among those who tapped the September 11 victims' compensation fund, which was created by Congress to protect airlines from litigation...

While the narrative of the attacks in Washington and New York has been told in great detail, Mr. Franz said there were still elements that have not been made public. That includes mistakes by screeners that allowed hijackers to pass security and decisions by airlines and security companies that made the screening system prone to errors.

"We wanted to know what happened that day at the checkpoints, in the aircraft and at the headquarters of the corporations," Mr. Franz said.

The lawsuits also probed the airport security issue more deeply than law-enforcement agencies such as the FBI, said Donald Migliori, an attorney for other September 11 plaintiffs. The lawsuits included lengthy depositions with dozens of airport screeners on duty that day.

A spokesman for American Airlines, whose plane crashed into the Pentagon, said the company is "committed to working with families toward settlement."

Joe Wayland, an attorney for Argenbright Security Inc., the company that provided screeners at Dulles International Airport, said all defendants in the lawsuits are "sympathetic" to the families and willing to settle cases.

"None of the defendants believe anybody other than the terrorists are responsible for the 9/11 attacks," Mr. Wayland said.