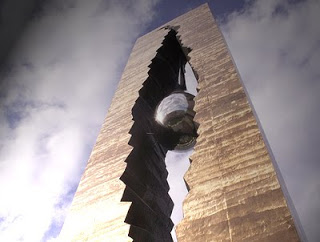 media making plans for 9/11 anniversary - and beyond

from vigilant citizen: 9/11 has inspired a myriad of memorials who are scattered all across America. Some of them are of questionable taste, others contain strange occult symbolism while others simply piss people off. Here’s the five most offensive... #5 Boston Memorial, #4 Polish Plaque, #3 All-Seeing Eye Memorial, #2 Teardrop Memorial & #1 Crescent of Embrace... 9/11 was a terrible tragedy, no matter who made it happen **cough** Rumsfeld **cough cough ** False flag terror ** cough**. Sorry, I don’t usually cough while typing. Since this event was the most terrible terrorist act committed on US soil, it is simply fitting that many memorials appear in honor of those who unjustly lost their lives. Some of them are very touching, inspiring and heartfelt. Others, not so much. Some even make you wonder if they were actually built for the victims or to serve an agenda. The monuments here are controversial, insensitive and slightly offensive…a little like this article. Enjoy. 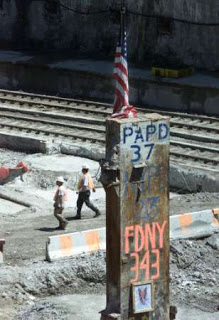 from dpa: A massive steel column from the original World Trade Centre destroyed by terrorist attacks on September 11, 2001, was returned to its original site on Monday to be a part of the memorial monument for victims. The 58-ton, 12-metre-high beam plunged deep into 'Ground Zero,' the site of the World Trade Centre's twins towers that collapsed, was the most visible remnant of the attacks. It stood erect while debris from the towers smouldered around it for weeks after the attacks. Its return also marked the rebirth of the World Trade Centre. The column was brought back from a depot at John F Kennedy airport to be the centre piece of the planned National September 11 Memorial and Museum. News reports said other large artefacts from 'Ground Zero' will also be returned to the site as construction for the new World Trade Centre is progressing. Joseph Daniels, president of the September 11 Memorial Foundation, was quoted as saying that artefacts like the steel column have "tremendous emblematic meaning... The last column represents all the effort by individuals that made this recovery effort unprecedented in American history," Daniels said. The United States will mark the eight anniversary of the attacks next month in which more than 3,000 people died.

lawyers can question 9/11 suspect in writing
from ap: Lawyers for a Guantanamo Bay detainee will be allowed to question — in writing — accused Sept. 11 mastermind Khalid Sheikh Mohammed, a federal judge has ruled. The decision is a setback for government lawyers who had sought to limit the scope of detainee lawyers' challenges to the detention and prosecution of terror suspects. In a written ruling, Judge Ricardo Urbina says lawyers for detainee Abdul Raheem Ghulam Rabbani can submit written questions about their client to Mohammed. Prosecutors say he worked for Mohammed, but Rabbani's lawyers contend he was just a menial servant, not a part of any terror network. The ruling says prosecutors may review the answers before delivering them to Rabbani's lawyers to remove any national security information.

army judge: 9/11 lawyers can't see cia 'black sites'
from miami herald: A military judge says defense lawyers for an alleged Sept. 11 plotter held at Guantánamo don't need to inspect secret CIA overseas prisons to determine whether the accused al Qaeda terrorist is competent to stand trial. Judge Stephen Henley, an Army colonel, ruled Monday that the so-called black sites have likely changed enough since 2006 that an inspection would be of no use to Ramzi Bin al Shibh's Pentagon-appointed defense lawyers.