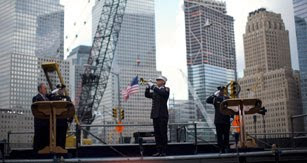 '9/11: science & conspiracy' from national geographic -
media war on 'conspiracy theorists':
marginalizing 9/11 truth brought to you by rupert & the cia*

no new york: obama to spend 9/11 anniversary in virginia

from politico: President Barack Obama plans to observe the anniversary of the Sept. 11 terror attacks with a visit to the Pentagon ... White House press secretary Robert Gibbs told reporters Tuesday. But Obama has no plans to visit New York City on the eighth year since the World Trade Center was destroyed. "I believe he will go to the Pentagon that day, and go to the memorial there and speak after that," Gibbs said in his morning gaggle. "But we have not announced more details than that." Asked after the gaggle if the president has any plans to visit New York City for the occasion, a White House official told POLITICO he does not and that is unlikely to change. President George W. Bush marked the 9/11 anniversary with visits to lower Manhattan in 2002 and 2006. Last year, Obama and Sen. John McCain (R-Ariz.), then Obama's rival for the presidency, both attended a memorial ceremony at the World Trade Center site as Bush dedicated a memorial at the Pentagon.

federal government to buy land for flight 93 memorial
from cnn: Pennsylvania landowners around the September 11, 2001, crash site of Flight 93 have reached an agreement with the federal government allowing construction of a permanent memorial there, the government announced Monday. U.S. Interior Secretary Ken Salazar said the National Park Service has "reached agreements with all the landowners needed" to establish the permanent memorial for the 40 people killed in the terrorist hijacking nearly eight years ago. Salazar said the government will pay the landowners approximately $9.5 million.

bobcats over washington on 9/11:
what were 2 mystery aircraft doing overhead the pentagon attack?

from 9/11 blogger: Two military aircraft were flying at high altitude near the Pentagon around the time it was hit on 9/11, but the identities of these aircraft and what they were doing over the Pentagon are unknown.

The planes had the call signs "Bobcat 14" and "Bobcat 17." A partial transcript of air traffic controller communications reveals they were communicating with the control tower at Washington's Reagan National Airport, which is less than a mile from the Pentagon, between at least 9:31 a.m. and 9:40 a.m. on September 11. [1] (The attack on the Pentagon took place at 9:37 a.m. [2]) Radar data has shown that the two aircraft flew "in trail" (in single file, with one directly behind the other) at an altitude of 21,000 feet, and were overhead in the few minutes before the Pentagon was hit. [3]

LAUNCHED FROM DOVER AIR BASE
It would seem essential to establish the exact identities of these aircraft and find out what they were doing in the vicinity of the Pentagon at such a critical time. Yet, eight years after the attacks took place, we still do not have this information. (The fact that these aircraft were near the Pentagon at the time it was hit is itself virtually unknown.)

According to a 9/11 Commission memorandum, "flight strips and other information" indicate that the two aircraft, Bobcat 14 and Bobcat 17, "originated out of Dover Air Force Base in Delaware." The memorandum added, "It is possible, but not confirmed, that they were Air Force corporate passenger jets." When questioned by the 9/11 Commission, Bob Lazar, the acting operations manager at Reagan Airport on September 11, said he "did not remember any aircraft with the call sign 'Bobcat' that hung out over the National airspace" that day. All he could say was that he did remember two aircraft "coming from the north, but he did not think that they entered National's airspace." [4]

OTHER AIRCRAFT NEAR THE PENTAGON
Furthermore, there were at least two other military aircraft near the Pentagon at the time it was hit. A C-130 cargo plane that took off from Andrews Air Force Base, which is 10 miles from the Pentagon, was airborne by 9:33 a.m., and was seen by numerous witnesses above the Pentagon just after the attack there. [5] Its pilot reportedly witnessed the explosion from the Pentagon crash. [6]

And television news reporters described a "white jet" plane that was "circling the White House" a few minutes after the Pentagon was hit. [7] (The White House is about three miles from the Pentagon.) Two government sources familiar with the incident later told CNN that the plane was a military aircraft, but its details were classified. An analysis by CNN suggested the aircraft was an E-4B, which is a militarized version of a Boeing 747 that is used as a flying command post. [8] One such aircraft is known to have taken off from an airfield outside Washington, DC, shortly before the Pentagon was hit. [9]

Considering the historical significance of the 9/11 attacks, which have had devastating consequences that affect us to this day, it is essential that important details surrounding those attacks be thoroughly investigated. We therefore need to know exactly what the two aircraft--Bobcat 14 and Bobcat 17--were, and why they were flying above the Pentagon around the time it was attacked on September 11.

outrage after ad shows 9/11 attacks - with dozens of planes

from raw story: A television ad made by the Brazilian unit of ad agency DBB made its rounds on the Internet Wednesday, sparking outrage from viewers and the organization the ad was originally supposed to be for. The ad shows a graphical recreation of the Sept. 11, 2001 attacks, followed by an additional scenario showing dozens of planes descending on New York City. It surfaced after winning a nonprofit award. The tag line? "The tsunami killed 100 times more people than 9/11. The planet is brutally powerful. Respect it. Preserve it." "We are just utterly appalled," WWF spokeswoman Leslie Aun told the New York Daily news on Wednesday. "This ad is not something that anyone in our organization would ever have signed off on." DBB Brazil said the "team" that made the ad -- produced late last year -- is no longer with the company.

green adviser's past stirs trouble for white house at critical time
from foxnews: President Obama's "green jobs" adviser could become a mounting liability for the Obama administration, as the latest revelation about Van Jones shows his belief that the Sept. 11, 2001, terror attacks may have been an inside job. Jones joined the "9/11 truther" movement by signing a statement in 2004 calling for then-New York Attorney General Eliot Spitzer and others to launch an investigation into evidence that suggests "people within the current administration may indeed have deliberately allowed 9/11 to happen, perhaps as a pretext for war." The statement asked a series of critical questions hinting at Bush administration involvement in the attacks and called for "deeper inquiry." It was also signed by former Rep. Cynthia McKinney and Code Pink co-founder Jodie Evans.