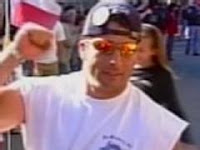 from arizona republic: A 43-year-old man found dead in a Scottsdale apartment last week was a New York City firefighter who survived 9/11.

A death notice published in Newsday on May 18 said Princiotta died "as a result of post 9/11 lung complications." But Scottsdale police on Tuesday said they are investigating the death as a homicide.

Police went to Princiotta's home after a relative told authorities they had not heard from him. It appeared Princiotta had died "many days prior" to the discovery of his body, according to police.

A few days later, his body was placed on a historic firetruck and taken to Sky Harbor Airport under police escort for the trip to New York and a funeral on Long Island. Princiotta was a member of Ladder 9, based at a firehouse less than a mile from Ground Zero.

The homicide case was a shock to Princiotta's brother, Joseph Princiotta. He told 12 News that the family expected pathology to show the lung condition had killed his brother. Joseph Princiotta said his brother moved to Arizona last January because he found it easier to breathe. Two months after the attack, Princiotta was one of six New York firefighters who rode bicycles from New York to California on a tour to thank America.