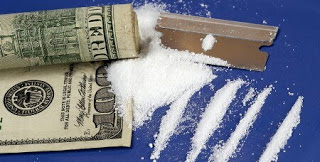 95% of US banknotes show cocaine traces

from bbc: The largest study of banknotes has found that 95% of dollar bills in Washington DC bear traces of the illegal drug cocaine. The figure for the US capital is up 20% over two years. Researchers at the University of Massachusetts in Dartmouth tested notes from more than 30 cities worldwide. They say the rise observed in the US may be due to increased drug use caused by higher stress levels linked to the global economic downturn. Bank notes can pick up traces of cocaine directly from users snorting it through rolled up bills or when cash is stacked together.

Besides Washington, other big US cities such as Baltimore, Boston and Detroit had the highest average cocaine levels on their dollar bills. Dr Yuegang Zuo, who led the research, said: "To my surprise, we're finding more and more cocaine in banknotes. I'm not sure why we've seen this apparent increase, but it could be related to the economic downturn, with stressed people turning to cocaine." Other countries where notes were tested were Canada, Brazil, China and Japan. China had the lowest rates, with only 12% of its bills contaminated. In the US the cleanest bills were collected from Salt Lake City, home of the Church of Jesus Christ of Latter-Day Saints, better known as the Mormons.