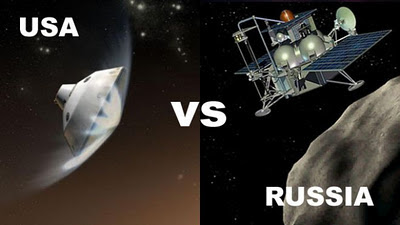 from foxnews: It’s a grueling marathon, only this time the finish line is the Red Planet -- and the race takes place at 70,000 miles per hour. NASA’s newest Mars rover is scheduled for launch Saturday; Curiosity should arrive at the Red Planet's mineral-rich Gale Crater next August, after a 354-million-mile, 8.5-month voyage aboard an Atlas V rocket. Meanwhile, the European Space Agency has received the first signal from an unmanned Russian spacecraft bound for a moon of Mars since it was stuck in Earth's orbit two weeks ago, officials said Wednesday -- raising hope that mission might be saved. ESA spokesman Bernhard von Weyhe said contact with Russia's Phobos-Grunt probe could be the first step in restabilizing the mission. If successful, Phobos-Grunt could leave Earth's orbit at more or less the same time as its American counterpart. It's a head-to-head race begun not with a pistol but a rocket launch. So who will reach Mars first?