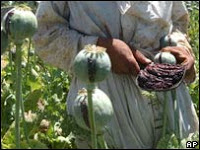 update: 'on the map' with avi lewis - war on drugs (june 21, 2007)
Avi talks to Andre Hollis, a former deputy assistant secretary of defense for counternarcotics. He's one of the author's of America's appoach in Colombia, and a player in the current plans for Afghanistan...

from bbc: Opium production in Afghanistan is soaring out of control, the annual UN report on illegal drugs says.

The World Drug Report says more than 90% of illegal opium, which is used to make heroin, comes from Afghanistan.

It says cultivation of opium poppies increased dramatically in the country, despite the presence of more than 30,000 international troops there.

The report says Afghanistan is unlikely to regain real security until the production of illegal drugs is tackled.

In the 1980s, Afghanistan produced some 30% of the world's opium, but now that figure has more than tripled, the UN document says.

It says that Helmand province alone cultivates almost half the world's illegal opium.

Thomas Pietschmann, the report's author, says production in Helmand has now outstripped that of entire countries.

"So only one province, three times as important as the whole of Myanmar, the second-largest opium-producing country," Mr Pietschmann says.

The report says that while global co-ordination of drug law enforcement has improved, traffickers of heroin from Afghanistan and of cocaine from Colombia are now targeting new routes in Africa.

The UN says this threat must be addressed immediately if Africa - already struggling under the burden of HIV/Aids, tuberculosis and malaria - is to avoid the serious health damage caused by drug abuse.

The report also shows that the overall market for illicit drugs remained relatively stable in 2005-2006.