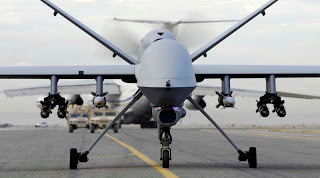 “As scrutiny and debate over the use of remotely piloted aircraft (RPA) by the American military increased last month, the Air Force reversed a policy of sharing the number of airstrikes launched from RPAs in Afghanistan and quietly scrubbed those statistics from previous releases kept on their website.”

It’s praiseworthy to note present pressure on military, because of John Brennan CIA nomination.  Brennan defends legality of deadly use of drones on Americans. The Air Force seems motivated by current politics as detailed below:

“The data removal coincided with increased scrutiny on RPA policy caused by President Barack Obama’s nomination of John Brennan to head the CIA. Brennan faced opposition in the Senate over the use of RPAs and his defense of their legality in his role as Obama’s deputy national security adviser. On Feb. 20, two days before the metadata indicates the scrubbed files were created, Sen. Rand Paul, R-Ky., sent a letter to Brennan saying that he would filibuster the nomination over concerns about using RPA strikes inside the U.S., a threat he carried out for over 12 hours on March 6 (Brennan was confirmed the next day). That same day, Sen. Lindsey Graham, R-S.C., told a crowd in South Carolina that strikes by American RPAs have killed 4,700 people.”

Hats off to the people who’ve applied the pressure!