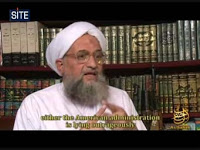 from ap: Osama bin Laden's chief deputy on Tuesday denied a theory that Israel carried out the Sept. 11 attacks and blamed Iran and Shiite Hezbollah for spreading the idea to discredit the Sunni al-Qaida's strike against the U.S.

The comments in a recording posted on an Islamic Web site reflected the increasing criticism by al-Qaida's No. 2 leader Ayman al-Zawahri against Iran. Al-Zawahri has accused Iran in recent messages of seeking to extend its power in the Middle East, particularly in Iraq and through its Hezbollah allies in Lebanon.

The authenticity of the two-hour audio recording could not be independently confirmed. But the voice sounded like past audiotapes from the terror leader, and the posting where it was found bore the logo of Al-Sahab, al-Qaida's official media arm.

and, no, this isn't that video from the onion...