alan keyes: stop obama or US will ‘cease to exist’

from raw replay: Former presidential candidate Alan Keyes talked to KHAS’ Curt Casper after speaking to a fundraiser in Hastings, Nebraska. Keyes was highly critical of President Obama... "Obama is a radical communist and I think it is becoming clear. That is what I told people in Illinois and now everybody realizes it is coming true," said Keyes who ran unsuccessfully against Obama for the Senate in 2004. "He is going to destroy this country and we are either going to stop him or the United States of America is going to cease to exist," said Keyes...

Keyes also claimed that Obama had no standing to be president. Keyes said Obama was actually born in Kenya and so did not meet the Constitutional presidency requirements of being a natural-born U.S. citizen. He said Obama was a "usurper occupying the office without constitutional warrant... He has refused to provide proof that he is in fact a natural-born citizen," Keyes said. "I'm not even sure he is president of the United States." When the reporter interviewing him apparently cracked a smile at this, Keyes angrily responded with "that is not a laughing matter. We're going to find ourselves in the midst of chaos, confusion and civil war." Keyes is one of several people who have filed lawsuits challenging Obama's citizenship... KHAS has more details here. This video is from KHAS, broadcast Feb. 19, 2009. 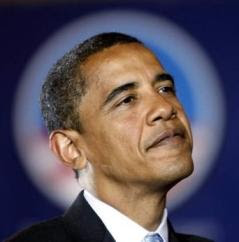 from suntimes: Americans named President Obama as their No. 1 hero, followed by Jesus Christ and Martin Luther King, in a new Harris poll. Others in the top 10, in descending order, were Ronald Reagan, George W. Bush, Abraham Lincoln, John McCain, John F. Kennedy, Chesley Sullenberger and Mother Teresa. People were asked whom they admired enough to call their heroes. Those surveyed were not shown a list of people to choose from. The Harris Poll was conducted online among a sample of 2,634 U.S. adults by Harris Interactive.

obama's 'seven days in may' moment 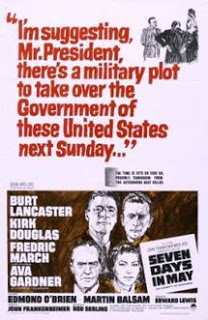 from robert parry: Only one month into his presidency, Barack Obama is finding himself confronting not only George W. Bush’s left-behind crises but an array of influential enemies in the military, financial circles, the political world and the media – determined to thwart Obama’s agenda for “change.” ... It is not entirely inconceivable that Obama’s powerful enemies could coalesce into a kind of “Seven Days in May” moment, the novel and movie about an incipient coup aimed at a President who was perceived as going too far against the country’s political-military power structure. Far more likely, however, Obama’s fate could parallel Jimmy Carter’s, a President whose reelection bid in 1980 was opposed by a phalanx of powerful enemies at home and abroad, including disgruntled CIA officers, angry Cold Warriors, and young neoconservatives allied with Israel’s right-wing Likud leaders furious over Carter’s Middle East peace initiatives. Carter little understood the breadth, depth and clout of the opposition he faced – and the full story of how his presidency was sabotaged has never been told. [For the most detailed account, see Robert Parry’s Secrecy & Privilege.]

update: jfk, fdr & 'seven days in may'
from lisa pease: Robert Parry recently wrote of how President Obama's early actions might bring him a "Seven Days in May moment," referring to a fictitious coup attempt from a film of the same name, in which a popular military figure nearly took over the government. In Parry's piece, he compared Obama's situation to that of President Jimmy Carter. I was reminded, however, of President John Kennedy's comments regarding his own brush with the "Seven Days in May" scenario, and the dangers Obama too will face. I was also reminded of the coup that almost came about during President Franklin Delano Roosevelt's first term. The film "Seven Days in May" began as a novel by Fletcher Knebel, inspired to a great degree by Knebel's conversations with Gen. Curtis LeMay, President Kennedy's contentious Air Force Chief of Staff who was furious at Kennedy for not sending in full military support during the Bay of Pigs incident.

obama administration continues US military global dominance
from project censored: The Barack Obama administration is continuing the neo-conservative agenda of US military domination of the world — albeit with perhaps a kinder-gentler face. While overt torture is now forbidden for the CIA and Pentagon, and symbolic gestures like the closing of the Guantanamo prison are in evidence, a unilateral military dominance policy, expanding military budget, and wars of occupation and aggression will likely continue unabated. The military expansionists from within the Reagan, George H. W. Bush, Clinton, G. W. Bush administrations put into place solid support for increased military spending. Clinton’s model of supporting the US military industrial complex held steady defense spending and increased foreign weapons sales from 16% of global orders to over 63% by the end of his administration.

cfr/rockefeller deputy attends white house bank meeting
from kurt nimmo: “The incoming chairman of Citigroup, Richard Parsons, showed up at the White House Monday, fueling talk that the federal government might take a massive ownership stake in the troubled banking behemoth,” reports Politico. “Parsons’ appointment was to see Valerie Jarrett, one of President Barack Obama’s closest West Wing confidants.” According to the corporate media, the government plans to grab 40 percent ownership in Citigroup, a move that is widely explained as “nationalization” of the banks. “Nationalizing ailing banks means the government would tell bank execs to take a hike, and then oversee taxpayer dollars as they course through the banking sector’s veins,” writes Thomas Kelley for Yahoo News. “When all is well, perhaps after selling assets and operations to new private investors, the government then steps back and lets a newly regulated bank sector float on its way.” In fact, “nationalization” has nothing to do with telling the banksters to “take a hike” and it certainly has nothing to do with regulation. Bank nationalization is a code word for a banker scheme to “socialize” the insolvency of selected banks, i.e., this insolvency will be transferred to the tax payers. (See Nationalization: Code Word for Banker Takeover.)

lawmaker warns of 'forced servitude' under obama
from paul joseph watson: New Hampshire state representative Dan Itse, who is one of many lawmakers leading the charge to assert state sovereignty against federal encroachment, has warned that the Obama administration seeks to institute “involuntary servitude”. Appearing on Fox News to discuss the states’ rights movement, Itse told hosts Steve Doocy and Brian Kilmeade, “This is about drawing a line in the sand and saying we’ve tolerated usurpations for so long but we’re not going to tolerate you violating the constitution, we’re going to hold you accountable.” Asked if his warning about involuntary servitude under Obama meant young people being forced to attend community service, Itse responded, “Exactly, I mean, if you are required to do a job against your will with a pay scale not set by you or not agreed to by you, that’s involuntary servitude.”