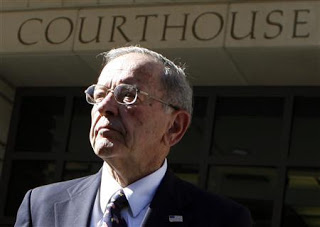 from reuters: Sen. Ted Stevens of Alaska was convicted of corruption on Monday [Oct27], a verdict that could endanger the Republican’s political future and help Democrats expand control of the Senate in the November 4 election.

Stevens, 84, was convicted on all seven counts of lying on Senate disclosure forms by failing to report more than $250,000 in home renovations and other gifts from an oil executive.

Stevens vowed to return to Alaska on Wednesday and resume campaigning for re-election against his Democratic challenger, Anchorage Mayor Mark Begich. “I will fight this unjust verdict with every ounce of energy I have,” he said in a blistering statement issued after the verdict.

“I ask that Alaskans and my Senate colleagues stand with me as I pursue my rights. I remain a candidate for the United States Senate.”

The loss of Stevens’ seat could help Democrats control 60 seats in the 100-seat chamber, enough to overcome potential Republican roadblocks.

The Senate could vote to expel a convicted felon with a two-thirds vote, but no action is expected before next week’s election. Since 1789, the Senate has expelled only 15 members.

from threat level: Sen. Ted Stevens, the Alaska powerhouse Republican senator, was convicted Monday on seven counts of lying about thousands of dollars in renovation work — including new plumbing — done on his home by a private oil services company. Stevens’ defense that he thought he’d paid for the series of tubes did not persuade the Washington, D.C., jury, which convicted him on all charges. Stevens faces up to five years behind a series of bars for each count, but he is not likely to serve time under sentencing guidelines. He also says he’s not stepping down from Congress. He’s up for re-election this year. For those who don’t recall, Stevens’ Tube Mania largely started on Threat Level (nee 27b Stroke 6). See an early roundup of Tube fun.